Go Woo-suk of the LG Twins is having the best season of his career. 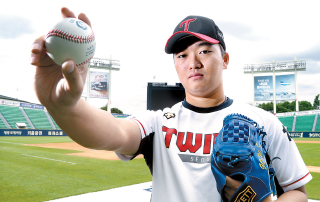 Although he didn’t start the season as a closer, his streak is good enough for him to be ranked third in saves for the league, only five saves behind the leader Ha Jae-hoon of the Wyverns.

Traditionally, the Twins have had some notable closers in the KBO. Kim Yong-soo picked up a total of 227 career saves, followed by Lee Sang-hoon and Bong Jung-keun, who both picked up 109 saves throughout their career.

However, since the three closers retired from the KBO, the Twins haven’t added any notable names to continue the club’s tradition. But this season, Go may be the one.

Go, who is playing in his third season in the KBO, started the season in the Twins’ bullpen and it wasn’t until the end of April that he earned a chance to be the closer after Jeong Chan-heon was taken off the roster due to injury.

Since then, Go has played in 33 games and has only gave up three runs.

Go’s performance was good enough for him to be invited to play in the All-Star game on July 21. Unfortunately, his performance wasn’t as good as he would have liked and he recorded his first blown save of the season.

During the game, Go gave up a game-winning double to Han Dong-min of the Wyverns at the top of the ninth inning.

Luckily for the closer, statistics from the All-Star game don’t count in the calculation of overall statistics.

According to Twins manager Ryu Joong-il, Go’s speed is his strength. Go tosses his four seam fastball at a speed of 155 kilometers per hour. Standing at 1.82 meters (5 foot, 11 inches), Go is not considered very tall for a pitcher, but he has a very dynamic pitching form, like his role model Oh Seung-hwan, formerly of the Colorado Rockies. His dynamic form allows him to toss fast and strong pitches.

Having trained with Oh last year, Go said, “It’s great to be compared to him, but I still have a long way to go.”

His solid performance has also made him one of the candidates for the national team’s roster for the upcoming Premier12 tournament in November, which is also a qualifier for the 2020 Tokyo Olympics.

“[Being invited to play for the] all-star and national teams is great, but I’m more desperate for LG’s win,” Go said.

The Twins haven’t won the Korean series or the regular season since 1994.

Normally, closers have background music that plays when they take the mound. Once Go became the Twins’ new closer, the Twins started playing Drowning Pool’s “Soldiers” as he walked onto the field. Interestingly, this was also the song that played for Bong in 2013.

“Once I became a closer, I thought about [changing the music],” Go said. “The club took care of it. I was thankful. I heard that Im Chan-kyu recommended the song to Bong Jung-keun. I really like it.”

While the song plays during home games, Go hasn’t been able to hear it as often as he would like to, because Jamsil Baseball Stadium in southern Seoul is required to turn off their speakers after 10 p.m.