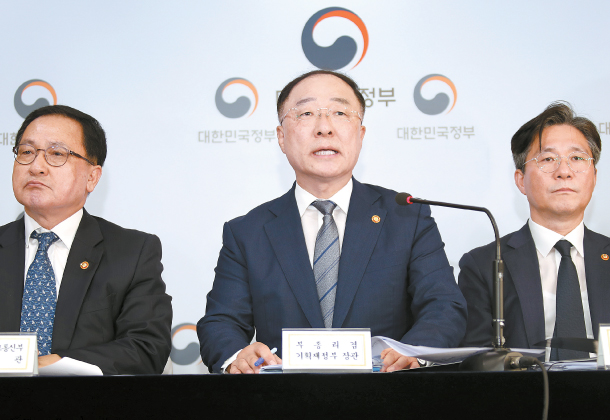 Finance Minister Hong Nam-ki, center, during a press conference held at the government complex in central Seoul on Friday announces the Korean government’s decision to remove Japan from its own white list in response to the same move by the Japanese government earlier that day. [YONHAP]

The financial markets were volatile Friday as tensions between Japan and Korea intensified, with the benchmark Kospi falling below 2,000 for the first time in seven months. The Korean won depreciated against the dollar, edging close to 1,200 won, as well as the yen.

With Seoul firing back in what is becoming a full-fledged trade war, retaliating with its own “white list,” both economies already weak are now facing increased threats.

The Korean Finance Ministry readjusted its outlook on this year’s growth from the previous 2.6 percent to 2.7 percent to 2.4 percent and 2.5 percent last month.

Japan earlier this week lowered its own gross domestic product (GDP) forecast from 1.3 percent to 0.9 percent.

Korean Finance Minister Hong Nam-ki in a press briefing on Friday said the Korean government will downgrade Japan from a trusted trade partner and place it in a newly established category, escalating the ongoing trade row.

Minister of Trade, Industry and Energy Sung Yun-mo said the Korean government will announce details on the removal of Japan from the Korean list early next week.

“The government has maintained that retaliating to Japan’s measures is not desirable for both countries,” said Hong at a press conference at the Central Government Complex in Seoul. “But as the Japanese government removed Korea from its ‘white list,’ the situation forces our government to take a measure.”

It is unclear how much Korea’s measures will impact Japan. Among Korea’s trade partners, it has the largest trade deficit with Japan, at $24.1 billion.

Seoul also announced that it would strengthen safety measures on tourism, foodstuffs and waste, hinting at more retaliatory action against Tokyo.

Hong explained that details on the measures were currently under discussion and will be announced when confirmed.

It currently remains unclear how Tokyo will make changes to its export processes through the “white list” removal. However, exports to Korea will likely be significantly delayed as they will need to be individually approved, hampering production for Korean industries.

The three materials Tokyo restricted last month have yet to be imported to Korea, according to the Trade Ministry.

Japan will officially implement the “white list” removal on Aug. 28. Experts believe details of Tokyo’s measures will be clarified by that date.

The government also announced a series of support measures to help companies affected by Tokyo’s trade restrictions, from tax credits to direct funding.

It explained that of the nearly 1,200 product categories restricted by Japan, 159 of them will most severely impact Korea due to the heavy reliance on Japan. Those products will receive special treatment, including exemption of additional taxes.

The government added that it will help companies navigate Japan’s export procedures in a way that will allow for the special approval of exports by Japanese companies to get around the individual approval process.

For companies that will have to import materials from other countries due to Japan’s measures, the government will exempt existing taxes.

The government will also provide up to 6 trillion won ($5 billion) in support to companies affected by Tokyo’s restrictions. It added that it will provide over 1 trillion won every year to support the local development of industrial materials and equipment.

The government has also decided to add 273.2 billion won to this year’s supplementary budget to respond to Tokyo’s export restrictions.

“The problem lies in the fact that intermediary products account for a high portion of Japanese imports,” said Ahn So-eun, an analyst at IBK Securities in a report. “That means that there is a high reliance on Japan in the local economy that is focused on processing trade. This will weaken production and investment by local industries and ultimately impact exports.”

According to Hyundai Research Institute, 90 percent of imports in 48 product categories are from Japan.

The Korea Institute for International Economic Policy (KIEP) said in a recent report that Korea imported $31.5 billion worth of materials to be affected by Japan’s restrictions last year. This amounts to 57.7 percent of the total Japanese import of $54.65 billion.

In 2018, Korea imported $6.2 billion worth of chemicals and chemical products, $6.1 billion of electronic parts, $4.4 billion of machinery parts and $4 billion of basic metal products.

Korea had a 19.8-percent trade dependency on Japan for chemical materials and a 9.9-percent dependency for electronic parts last year.

Many Korean companies are on the alert.

“We will have to monitor the situation to understand exactly what materials will go under export restrictions,” said a spokesperson at SK Hynix. “Through our suppliers and Japanese branch, we have made efforts to understand the situation beforehand, however, we can’t disclose specifics at this stage.”

Korea’s semiconductor industry is expected to bear the brunt of the growing trade row due to the close trade partnership with Japan.

On top of the materials restricted last month, the “white list” removal is expected to impact additional semiconductor materials, such as silicon wafers. Japanese companies make more than 50 percent of silicon wafers globally.

“Even if there are categories impacted by the ‘white list’ [removal], we remain committed to supplying our customers without delay,” said a spokesperson for Samsung.

During the chipmaker’s second quarter earnings call earlier this week, Lee Myung-jin, Samsung’s head of Investor Relations, said that “predicting its impact was difficult at the moment as the company is uncertain how the tightened export procedures would work.”

While Korea has an alternative source for silicon wafer supplies, SK Siltron, the company alone will unlikely be able to keep up with local demand.

Korea Economic Research Institute (KERI), a think tank under the Federation of Korean Industries (FKI), estimated that Korea’s GDP could fall by 2.2 percent if there is a supply shortage of semiconductor materials by 30 percent as a result of the export restrictions.

Chemical companies are also expected to take a hit as a result of Tokyo’s restrictions.

Electric vehicle (EV) batteries manufactured by LG Chem and SK Innovation need pouch films that could be impacted from Tokyo’s restrictions. DNP and Showa Denko, Japanese companies, hold 70 percent of the market for the material.

LG Chem explained that it is diversifying supply routes to replace Japanese imports.

“We have diversified suppliers for materials for car batteries such as cathode material […] even before the export restrictions from Japan surfaced,” said LG Chem CEO Shin Hak-cheol last month. “Materials purchased abroad can mostly be produced domestically, and we have prepared to diversify for a long time with materials from the domestic market, Japan, China and European companies.”

LG Chem plans to increase its internal sourcing of cathode materials for battery production to 35 percent from the current 20 percent.

The company expects to source 50 percent of the material domestically in the next three to four years.

Analysts were less optimistic in the short term.

“If the ‘white list’ removal lengthens out, this will likely lead to a reduction of battery production due to problems in material supply,” said KB Securities analyst Baek Young-chan in a report.

Meanwhile, the domestic auto industry was less worried about the restrictions.

“95 percent [of parts] are localized and while the rest could be affected [by the restrictions], they can be supplied from countries other than Japan,” said a spokesperson for auto-parts supplier Hyundai Mobis. “We also have extra inventory of up to 100 days, so there is no problem for the next two months.”

“There could be rises to shipping costs if we are supplied from European countries instead of Japanese suppliers,” added the spokesperson. “But this will likely be a negligible difference.”

While the government has stressed localization, analysts said it would not immediately remedy the impact of Tokyo’s measures.

“Localization cannot be a short-term solution,” explained a semiconductor industry expert who requested anonymity. “There are over 500 production processes for semiconductors […] and a complete localization is not possible.”

“No country is completely self-sufficient, and it is not even possible,” said Cheong In-kyo, a professor of international trade at Inha University. “The government needs to pursue a foreign policy that maintains an amicable diplomatic and trade relationship with major trade partners.”

“It needs to talk to Japan about the real problem at hand.”

IHS Markit in a report noted that the trade war will not only have a negative impact on both countries but will also more broadly affect the Asian market.

“An escalating bilateral trade dispute between Japan and Korea will also endanger regional momentum for further trade liberalization,” said Rajiv Biswas, IHS Markit economist. “Exports are a key growth engine for many Asian economies, and the shockwaves from increased trade sanctions are having a negative impact on the many exporting companies across the APAC region.”

“Korean businesses are concerned that Japan’s decision to implement further export restrictions could severely damage the cooperative economic relationship between the two countries,” said FKI in a statement.

“We urge the Japanese government to actively take part in conversations past the current conflict.”