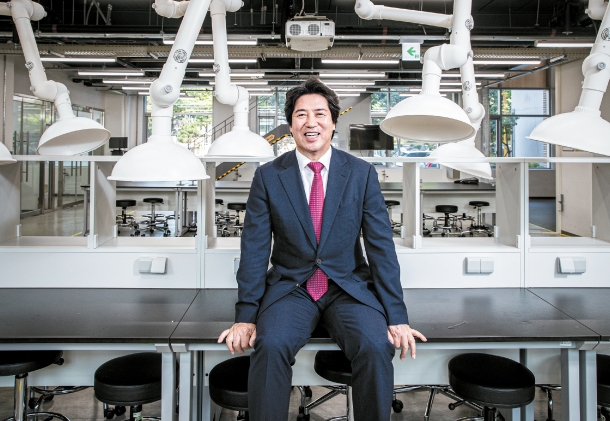 Min Sang-gi, president of Konkuk University (KU), went to Germany in the 80s when he was a young graduate student who was looking for something new.

One thing that really challenged him was the classes centered on debates. He had to constantly ask “why” in his classes, and the exams were one-on-one sessions with professors, which were, for Min, quite a novelty.

“I realized that creativity, the symbol of Germany, comes from [education],” said Min. “I forget about the things I learned in written exams as soon as I turn my back on them, but for spoken exams, I remember them like yesterday, 10 years later.”

Min said he could not forget the shivers that he got at the time.

This is the story behind why Min broke free of the standardized curriculum of schools and introduced an education system that asks “why” and “how.”

“I will take the road not taken,” Min said in his inauguration speech when he became president of KU in September 2016. “I will search for innovative educational methods and open a new pathway for students to look for [opportunities] in finding jobs and creating their own start-ups.”

Min says that if you want to really teach students something and foster creative oddballs, students should ask “why” and find a “how,” which helps them think for themselves, instead of asking “what.”

Inspired by his experience in Germany and his goal to create what Min thinks is an innovative educational environment, the president has reformed the school’s curriculum by removing barriers between departments, cooperating with companies to offer students hands-on experience and making online lectures open to students.

Min graduated from the College of Animal Husbandry at KU in 1981. He then went to Germany to study food engineering and received his bachelor’s degree in 1985, master’s degree in 1988 and doctorate degree in 1994, all from the same school at the University of Hohenheim. Min soon returned to KU as an assistant professor at the department of animal product processing. In 2016, Min was elected as president of KU after receiving a majority of votes from KU faculty members and student representatives.

The JoongAng Sunday sat down with Min at his office in Gwangjin District, eastern Seoul, last month to talk about how he intends to change KU into a school that offers students autonomy and fosters independent thinking.

Q. KU has been making bold changes in its goal to achieve higher education. What have you been doing so far?

A. KU has been expanding its campus by actively investing in its infrastructure since 2005. Our newly-renovated structures amount to 22 buildings, including our life science building, Sanghuh Hall, and new engineering building. Now that we have strong infrastructure, we need to fill it to the brim. Ensuring internal stability is my goal. By reorganizing academic affairs, I removed the impenetrable barriers between departments. The purpose of this reform was to unite departments that were split into pieces and go on an [academic] path of fusion and convergence.

Why is destroying the barriers between departments important to you?

The current school system that is subdivided into dozens of departments is a byproduct of the second industrial revolution. Creating barriers between departments was aimed at promoting growth that would in turn support rapid technological advancement in an era of labor division and mass production. However, in the fourth industrial revolution, fusion and complexness bring a competitive edge. It is an era where knowledge that comes from a combination of departments wins, not the amount of knowledge that comes from each department.

Why did you reorganize KU’s engineering college?

Our engineering college reorganized its 14 departments into five large-scale divisions so that it could focus on a curriculum that is based on jobs in demand by related industries. Our division of chemical engineering, which is a combination of our chemical engineering, organic and nanosystem engineering and materials chemistry and engineering departments, became a large-scale division which now accommodates an entrance quota of 161, an enrollment of 900 students and 24 full-time teachers. Students come and go between departments and break free of classrooms to participate in work experiences and creative activities. Professors are also active in their fused and mixed research and are also actively sought after to carry out research.

KU reorganized its social studies departments as well. What was the idea behind those changes?

In 2017, we integrated seven different departments from three different colleges, including our political science, commerce and economics departments and global integrated studies college, to form a social sciences college in order to create synergy in the social science fields. We have political science, economics, public administration, international trade, applied statistics, global integrated studies and global business departments, which run a cooperative education course program between them. We also offer various subjects to guarantee students a wide range of choices.

Do students feel more confident in trying out new things?

Students who were scared at first soon relentlessly challenge themselves. Theories that do not accompany hands-on experience are dead knowledge. That is why we increased the number of companies that offer work experience to students from 155 companies in 2016 to 699 this year. Students who participate in the program also increased threefold to 1,014 compared to 2016. The number of student start-up entrepreneurs was four in 2016, and that has increased to 25 [this year], and the number of start-up clubs increased from 13 teams to 66 teams. Our start-up classes are popular as around 6,300 students completed the courses [as of this year].

The changes you have made in KU look amazing, especially the Kreative Cube where students can study in an open environment without barriers and the Smart Factory, a lab space for students. Could you tell us about any other changes you’ve introduced?

This is an era where oddballs who have an intricate way of thinking achieve things. We need to remove more barriers. This is why we removed the minimum grade point average for students who want to change majors, which offers them a wide choice of subjects to study from. This started from the first semester of this year. We also removed the minimum amount of credits that these students need to earn to complete their course. We also said to freshmen, “choose your disciplines as you like, since you have become students of KU.” Before, departments could only accept transfer students of up to 20 percent of their entrance quota, but now, there are departments that can accept students up to 100 percent.

It must be important for professors to embrace the changes. How do they respond to them?

Young professors welcome the changes, but veteran professors seem to be weary [of them]. This is natural, as the change is not just a tiny adjustment but an explosive one. However, senior professors are responding positively to seeing younger professors taking the lead.

How are your plans of recording all lectures and making them accessible to KU students going?

So far, we have made 10 percent progress [on the project]. We will start with the lectures that are high in demand. Since students have paid their tuition, they should be able to take the online courses that they want. This is the last step in educational reform.

What is KU planning for the future?

We will create a graduate school specialized in artificial intelligence next year. We even have a committee that is preparing for [the school’s] launch. Recruiting experts is the most important thing. Also, the government should actively support us.

Most university presidents are uncomfortable with the government’s policies like tuition and college entrance exams. What do you think?

Look at socialist countries like Vietnam and China. Higher education is growing rapidly. This is thanks to their education system and objectives not changing and planning for the long term. On the other hand, in Korea, when the [education] minister and ruling party change, policies change alongside them as well. This is because universities are seen in a political sense. I wish we could implement a committee for higher education, which would be responsible for a sustainable [education] policy. Putting restrictions on private universities and applying general inspections [on schools] goes against current trends.