Moon punches back and restricts exports to Japan

Moon punches back and restricts exports to Japan 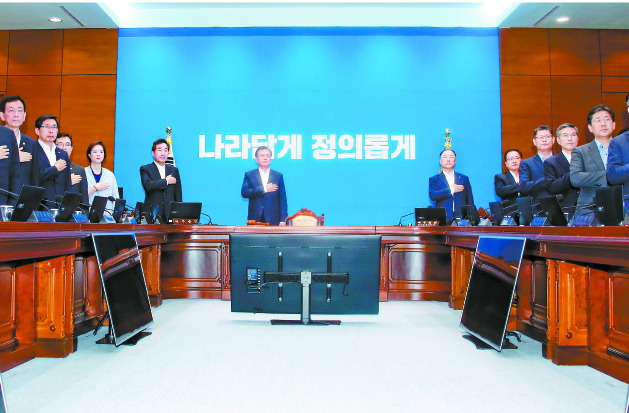 President Moon Jae-in, center, presides over a cabinet meeting in the Blue House on Friday to discuss Korea’s countermeasures to Japan’s economic retaliations against Korea. [YONHAP]

Korea will remove Japan from its own list of trusted trade partners and impose tighter regulations on tourism and food imports, a response to Tokyo’s newest economic retaliations announced earlier Friday.

“We will make strong demands that the Japanese government recant the latest measure through various channels,” Hong said in a press conference. “We will also urge Japan to resume bilateral consultations.

“Although we will continue efforts for a diplomatic resolution, we will also delist Japan from our white list and take steps to tighten our export management,” Hong said. “Furthermore, we also plan to reinforce safeguard measures to protect the people’s safety, starting from tourism, food and waste imports.”

Hong said Korea will speed up efforts to persuade the international community of the unfairness of Japan’s export restrictions.

At the cabinet meeting, Moon warned about eye-for-an-eye retaliations and condemned Japan for having the malicious intention to “attack and hurt our economy by impeding our future economic growth.”

The president’s angry message was aired live, an unprecedented move intended to stress his determination.

“If Japan - even though it has great economic strength - attempts to harm our economy, the Korean government also has countermeasures with which to respond,” Moon said. “We will never overlook such circumstances where Japan, the instigator of these wrongs, is turning on us. We will step up our responses in a phased manner according to the measures taken by the Japanese government.

“As we have already warned, if Japan intentionally strikes at our economy, Japan itself will also have to bear significant damage,” Moon said.

Moon made clear that Tokyo was responsible for the current situation. “No matter what pretexts are given, the Japanese government’s decision is undeniable trade retaliation against our Supreme Court’s rulings on Korean victims of forced labor during colonial rule,” Moon said.

Korea and Japan share a bitter history, including Japan’s 1910-45 colonial rule. At the end of last year, the Supreme Court ruled that Japanese companies must pay compensation to individual Korean victims of wartime forced labor. While Tokyo insists that the matter was already settled in a 1965 bilateral claims agreement, the Moon administration has said it cannot intervene in a court ruling, citing separation of powers.

Moon also condemned Japan for reopening the old wounds despite decades-long efforts to get over the bitter history. He said Korea is no longer the weak country it was in the past and is strong enough to withstand the crisis.

Japanese Prime Minister Shinzo Abe, center, and other ministers attend a cabinet meeting at the Prime Minister’s Office in Tokyo on Friday. [EPA/YONHAP]

“There may be hardships in the immediate future. However, if we succumb to challenges, history will repeat itself,” Moon said. “If we take the current challenges as an opportunity instead and turn them into a chance to make a new economic leap, we can fully triumph over Japan. Our economy can surpass Japan’s.”

Korea does not want a “vicious cycle of tit-for-tat,” Moon said. “There is only one way to stop this. The Japanese government must withdraw its unilateral and unwarranted measures as soon as possible and take a path toward dialogue.”

“Japan’s measure is an act of betraying a friendly, cooperative partner,” Vice Minister of Foreign Affairs Cho Sei-young told Nagamine. “Our people will no longer consider Japan as a friend.”

Around 10 a.m. on Friday, Abe hosted a cabinet meeting and approved a plan to remove Korea from its list of trusted trade partners, adding new export restrictions on the country. The decision was its second economic retaliation against Korea. Starting July 4, Tokyo imposed tighter export restrictions to Korea on three materials crucial for semiconductor and display manufacturing.

Korea was one of 27 countries on Japan’s so-called “white list” that benefit from relaxed export rules for many strategic items, such as so-called “dual use” goods and technology that can be used for both civilian and military applications. 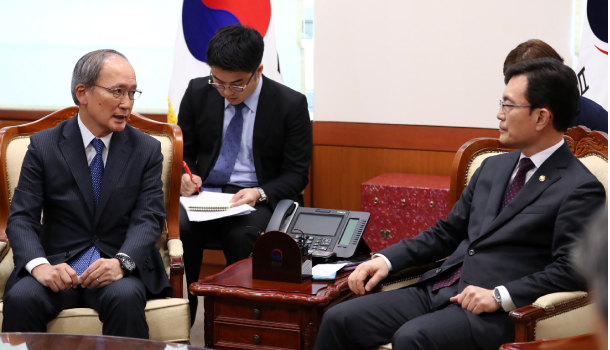 “We will formally announce the change on Aug. 7 and start implementing it on Aug. 28,” said Seko after the cabinet meeting.

According to the Korean government, 1,194 items are listed as strategic goods in Japan. Among them, 263 are highly sensitive items that require individual export approvals, while trade controls on the remaining non-sensitive items are less tight for countries on the white list.

After the delisting takes effect, Korea will have to get individual approval for shipments of all dual-use goods including the non-sensitive items.

“Over the past decades, Korea and Japan shared values of liberal democracy and a market economy,” Kim said. “But Japan removed Korea from the white list, citing national security issues. This is an act of public humiliation against Korea.”

Kim said it is extremely disappointing that Japan’s action is intended to hamper Korea’s future growth. “Taking into account the future relations of the two countries, I am truly worried,” he said.

He said Korea had put all possible diplomatic effort into resolving the situation. According to Kim, Korea dispatched special envoys twice in July and the United States also proposed a so-called standstill agreement between Korea and Japan to stop escalating the tensions and find a diplomatic resolution, but to no avail.

Pointing out that Korea has treated Japan as a trusted partner in its policy to reduce tensions between the two Koreas and in the region, Japan has actually obstructed the peace-building efforts, Kim said.

“We must seriously think about what a normal country of peace and prosperity that Japan wants to become looks like,” he said.

Kim mentioned the possibility that Korea may scrap the bilateral General Security of Military Information Agreement (Gsomia), perhaps the main symbol of trust between Korea and Japan.

Foreign Minister Kang Kyung-wha condemned Japan at a regional forum attended by her Japanese counterpart, Taro Kono. She said Japan’s latest measure was done in a “very unilateral, arbitrary manner” at the foreign ministerial meeting of the Association of Southeast Asian Nations (Asean) and Korea, China and Japan in Bangkok.

Kono immediately rejected her criticism. “I have not heard any complaints from our Asean friends about our export management measures,” he said.

Later in the day, Kang, Kono and U.S. Secretary of State Mike Pompeo were scheduled to sit down for a trilateral meeting, but a top presidential aide was skeptical that U.S. mediation would end the diplomatic row.

“We have to carefully think about why Japan took us off the white list, whether it has an economic purpose or a political purpose or both,” he said. “And taking that into account, we have to seriously consider how possible it will be for the United States to persuade Japan.”