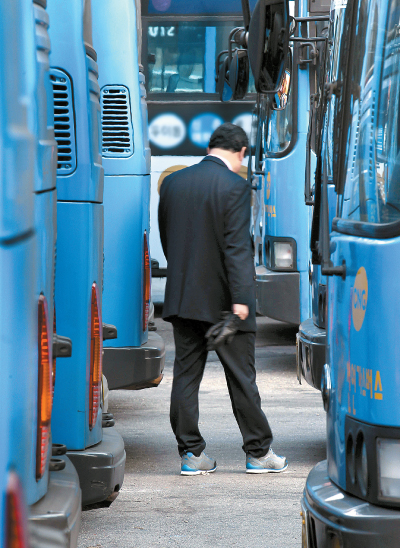 A bus driver heads to work at a bus depot in Seoul. Ahead of a full strike in May, bus drivers and their companies reached an agreement to extend the retirement age to 63. As retirement is delayed, benefits get cut. [JOONGANG ILBO]

A 65-year-old bus driver surnamed Park in South Chungcheong retired at 60. But he was immediately rehired.

Although his family is proud of him working past the retirement age, in October Park received unpleasant news from the National Pension Service (NPS).

Under the current law, the NPS sets a standard based on the average monthly income of all pension recipients over the previous three years. When income exceeds this average, the pension payment is cut. The cut is as little as 5 percent and as much as 50 percent.

If he only worked for 20 days fewer, his income would have been below the three-year average. But he can’t because drivers are needed.

“I made a steady contribution building my pension from the blood and sweat I put into my work,” Park said. “Even my wife is angry.”

He added that he can’t just quit his job and hang around the house to get the full benefit of the monthly annuity.

“I have driven the bus for 41 years,” Park said. “How could anyone make huge money from it? None. I used it in raising our children and to live day to day. How could they cut the pension?”

While the government is currently discussing whether to raise the legal retirement age from 60, some companies have already been raising it to as high as 65.

Bus drivers nearly went on a full strike in May. While some of the bus companies have already extended the retirement age to 61 or 62, many during the recent negotiations have agreed to extend it to 63.

Among the 390 drivers where Park worked, 83 of them, including Park, are contract employees who have passed the 60-year retirement age.

The number of people with pension cuts is expected to grow. In 2017, 64,474 people had their pensions payments reduced. As of March this year, that number was at 46,628.

Since 1998 through March this year, the number of people whose pension has been downsized totals 316,390.

The pension of a 66-year-old man surnamed Kim was reduced for the first time because of the income he was making in April 2014. By March this year, he had 26.4 million won cut from his pension.

“If you work for two more days in a month, your pension gets cut 30 percent because your income goes up,” said a 62-year-old bus driver in Daejeon, who only gave his family name Kim. “Why we are having our pension cut when our retirement age is extended and we are paying our taxes?”

A 70-year-old bus driver in Songpa, southern Seoul, said since getting his pension cut 2.7 million won in 2011, his pension has been cut every year.

“I can’t understand why if you don’t work they pay all of your pension, and if you do work and have income, they cut it,” Lee said.

Other pension schemes, including government employee pensions as well as the teacher pensions and military pensions, all get cut as much as 50 percent if the recipient has steady income.

“There are some elderly people who take out loans by putting their pensions as collateral because they are short on income,” said Rep. Jung Choun-sook, a Democratic Party (DP) lawmaker. “Downsizing the pension payment for elderly will only discourage them from working.”

Yun Suk-myung, a researcher at the Korea Institute for Health and Social Affairs, said it is best if the system that cuts pension payment be abolished to encourage more senior citizens to actively find jobs and work.

“The OECD has been recommending that this system be abolished since the early 2000s,” said Yun.

It’s just not that pensions get cut for people who land a job after retirement, have their retirement extended or earn income from a new business ventures.

They sometimes have to pay income taxes on the benefits they receive, which is a double whammy.

Last year, the number of people with pensions cut and still paying taxes was 3,776.

According to a report by DP lawmaker Rep. Jung, as of December last year, these people on average received 47,000 won less monthly. A 63-year-old man surnamed Lee contributed to his pension for 28 years and eight months. But because his monthly income exceeded the 2.27 million won on average last year, he received a benefit of 975,890 won. His benefit should have been 1.25 million won a month. He’s getting 271,040 won less.

He also had to pay 3,030 won as income tax on the pension he received.

The income tax levied on the pension payments is becoming a major concern.

Not all who receive pension benefits are taxed.

The income tax is only applied to new pension payments received after 2002. For example, if a person received 1 million won of benefits a month before 2002, that amount is not taxed.

That year is when the government started taxing pensions.

It only applies to those whose annual pension payments exceed 7.7 million won.

Last year on average a pension recipients paid 37,600 won of income taxes on their pension. The total amount received by the government was 1.3 billion won.

As of January, the average benefit received overall was 460,000 won, while the following month it was became 520,000 won.

The NPS has mentioned the need raise the threshold for pension taxation, as the current level does not fit well with realities faced by retirees.

Statistics Korea estimates the minimum living expenses for senior citizens is around 1.97 million won a month.

With the small pensions, it is difficult for the citizens to live. The pension is even mocked as an “allowance,” which is contributing to the worsening public trust in terms of the national pension system.

The NPS argues that the threshold for taxation should be raised from 7.7 million won to 12 million won.

This will help reduce the number of people who have to pay income tax. When raising the bar to 10 million won, only three people will be taxed on their pensions.

Another solution proposed is raising the bar to 8.5 million won, with the stipulation that anyone whose annual pension is less than 12 million won won’t be charged on a global basis. This will help reduce the number of people currently taxed from over 34,000 to 13,446.

“While the pension fund has a short history, resistance to the pension system will grow if taxes are added,” said the DP lawmaker Jung.

“And the total amount of tax collected from those pensions is not much.”

She said pensions should entirely be exempted, or only those who receive more than 1.5 million won a month should be taxed.

“Many countries have policies that increase the income of senior citizens and pension recipients through tax credits,” said Ryu Jae-rin, researcher at the National Pension Research Institute.

“Considering that the number of senior citizens living in poverty is expected to grow sharply here in Korea and that the taxable amount will grow, we need to make adjustments that will reduce the tax burdens.”

One way of preventing a cut on pension payments is to suspend the benefit payments. Under the law on national pensions, a person can suspend all or part of the pensions for a maximum five years.

When suspending a pension, a person can later receive 7.2 percent more annually.

This is considered a win-win strategy as the recipient will not have to worry about having their pension cut and receives more than what they would initially have received.

A 63-year-old who wished not to be named is an employee of a conglomerate. He works at the conglomerate’s office in Changwon, South Gyeongsang.

After retiring at age 60, he has been working under a contract that is renewed every year. He said he suspended receiving his pension after learning that it was getting cut because he was getting paid for working.

Yoo Seok-gwan, a 60-year-old bus driver in Ulsan, is getting his retirement age extended from 61 to 63.

“I have decided to suspend my pension after I heard it will be cut when I continue to work as my retirement age has been extended,” Yoo said.

But many show little interest, adding that since the money that comes into their pocket is so small, they don’t give much thought.

DP lawmaker Jung in February issued a bill that would abolish the cuts on pensions when a recipient starts working.

“The pension cut system is having a negative influence in discouraging older people from working,” Jung said. “And there’s the problem where only those that are financially well off have the capacity to prevent their pensions from being cut by suspending them, while those who are under tight budgets don’t have the room to see their pension cut when they continue to work.”

Among the 36 Organisation for Economic Co-operation and Development member countries, only seven countries including Japan and Spain cut benefits for those who work.

According to the National Pension Research Institute’s report, many of the countries since 2000 have allowed pension recipients to receive the full amount of their pension while still working.

The report said this was largely because these countries are trying to deal with the labor shortage and encourage older people to participate in economic activities.

But there are those who argue that the system needs to continue as most of the people who had their pension cut have relatively high incomes. The government has remained cautious on the issue, as it could have a negative impact on the pension pool.