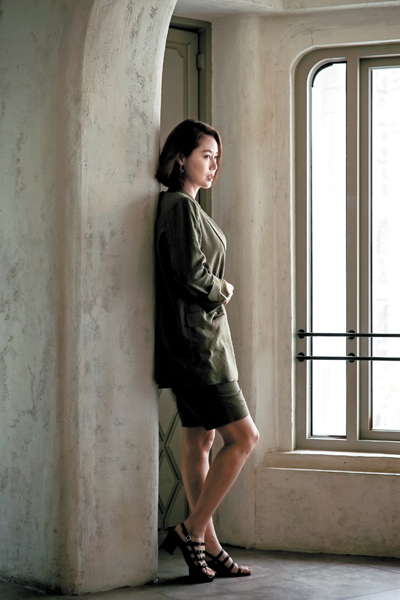 Actress Kim Sung-ryoung returns to the stage for the first time in five years with “Misery,” based on the 1990 hit film of the same name. The play is directed by Hwang In-roe, a former drama producer. When it premiered in Korea about a year ago, it received rave reviews for its set design. [SHIN IN-SEOB]

Actress Kim Sung-ryoung has taken on a range of roles over the past 30 years - from a cop to a swindler to a mistress - proving that she is not just a pretty face. But the former beauty pageant winner has long been adored for her timeless beauty and elegant demeanor.

As if shaking off the stereotype she has been carrying for so long, the 52-year-old actress is now taking on a role that many would never expect from her: Annie Wilkes, the fictional stalker from “Misery” (1990), based on a novel of the same title by author Stephen King.

Hollywood actress Kathy Bates won an Oscar in 1991 for her legendary portrayal of the character, who has become the epitome of a stalker.

Those who remember Bates’ version of Annie may think the willowy and doe-eyed Korean actress is miscast in the role, but Kim says that’s due to “prejudice.”

Top: The poster for the theatrical production of “Misery.” Above: Hollywood actress Kathy Bates played Annie Wilkes in the 1990 film “Misery,” and later won an Oscar for her role. [GROUP 8, SCREEN CAPTURE]

“Your appearance means nothing here. I think of Annie as an ordinary person who happens to be in love with a man,” said Kim during a recent interview with the JoongAng Sunday, an affiliate of the Korea JoongAng Daily.

Kim has been cast in the role of Annie for the theatrical performance of “Misery” that will run through Sept. 15 at the Sejong Center for the Performing Arts, central Seoul.

First staged in Korea 15 months ago, “Misery” grossed the highest ticket sales out of any stage performance on the day the play opened its ticket sales on Auction, a local ticketing website.

Other famous screen actors, such as Kim Sang-joong and Ahn Jae-wook, will take the stage in the production.

The last play Kim starred in was “Miss France” five years ago. It was the time when Kim’s career was at its peak. Her films - such as “The Fatal Encounter” (2014) and “The Target” (2014) - were released one after another.

“When you do a play, it’s hard to juggle two different works at a time. Coincidentally, I had nothing on my schedule as if I’m destined to do ‘Misery.’”

The following are edited excerpts from an interview with the actor.

Q. Did you have an urge to show a different side of yourself through this role?

A. I’ve been in a slump since last year but wanted to awaken my passion for work through “Misery.” Personally, I have known director Hwang [In-roe] for so long. He’s the one who offered me the first drama role after my big screen debut. But I turned down his offer by telling him that I only do films (laughs). He’s been asking me about other productions since then and this time, too. I didn’t want to let him down. And you know, you have few choices when you become my age.

Annie is different in many ways from your previous roles.

Actress Lee Ji-ha, who played Annie in the premiere, told me that this role wasn’t going to be easy. Now I know what she meant. Sometimes, I regret doing this. I have a lot more lines, about two to three times more than other plays. I have sleepless nights, too.

Your previous play, “Miss France,” was not an easy one either.

It was physically daunting, but all I did on stage was be happy and bubbly. But this time is different in a way that I have to shout and show all of my emotions. It sure is challenging. I have gotten older, too. I take in vitamins that are supposed to be good for my brain to help me not forget all the lines. (laughs) The size of the theater has become a lot bigger, too.

How did you develop your character?

A lot of people model their Annie from the film version, so I tried to fit myself [to the film] to some extent, but now I find myself blending with the character. Annie is somewhat grotesque and gloomy, but I am not. Wouldn’t it be exciting to have my crush in my place? The images of Annie created by Kathy Bates are surely the ones that the audience and I should go beyond. When “Misery” was staged in New York and had Bruce Willis [for the role of Paul Sheldon], he also had a different image [compared to James Caan, the actor in the film version.]

Can you relate to the way Annie is obsessed with author Paul Sheldon?

I think that anyone could behave like Annie. When you listen to a certain song, you become a fan of that musician, too. If you are so in love with a thing with all of your heart, you may go blind and become unable to realize what you are doing wrong. So this isn’t a thriller for me. I think I have become Annie already.

Do you sometimes feel inferior?

I often blame myself and I’m quite negative, too. But I try hard to look on the bright side. Everyone in my family has a slipped disc but I’m the only one who hasn’t gotten a surgery on my lower back because I work out every day to prevent myself from having pain. I’m grateful for my mom who gave me that slipped disc. The same goes for acting. I always feel that I’m not good enough and these thoughts are actually what led me to do theater. When one door closes, another one opens.

A lot of people probably want to ask you for tips on how to stay young. What is your secret?

I often go out to watch movies and theater productions. I try to know what’s going on in the world of social media, too. You have to be open-minded.