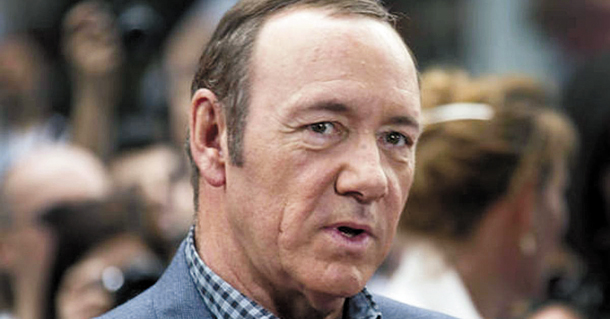 Actor Kevin Spacey read a poem about a worn-out and dejected boxer during an unexpected performance at a Rome museum Friday night, weeks after a criminal sexual misconduct case against him collapsed in Massachusetts.

Spacey’s appearance at the National Roman Museum was not publicly announced in advance. The museum had posted a cryptic notice on its website saying a two-time Oscar winner would be reading works by Italian poet Gabriele Tinti during a rare evening event but didn’t name the person.

During the reading, Spacey stood next to an ancient Greek bronze statue of a battered fighter while reciting Tinti’s “The Boxer.’’ The poem is about a fighter left bleeding at ringside, cast aside despite previous glory.

Anyone familiar with the rapid downward course of the former “House of Cards’’ actor’s career after sexual misconduct allegations were made against him in 2017 would have an easy time finding meaning between the lines.

Video clips published in Italian media and by U.S. news site The Daily Beast show Spacey dramatically intoning the verses, including one reading, “the more you are wounded, the greater you are. And the more empty you are. They used me for their entertainment, fed on shoddy stuff. Life was over in a moment.’’

Barbie Latza Nadeau, The Daily Beast’s Rome correspondent, said four journalists were invited to the reading and were promised sit-down interviews with Spacey that did not materialize.

“Everyone in the tiny room was left speechless by Spacey’s unapologetic performance. By the time it was over, a bigger crowd had gathered outside, and he read the whole poem again to them,’’ Latza Nadeau wrote.

She said the most poignant parts of the reading came near the end, when he read the lines, “You have to suck the heart of a hero as long as it beats,’’ and, “I shook the country, made the arenas vibrate, tore my opponents to shreds. I lit up the darkness, collected insults, compelled applause. Not everyone knew how to do this.”

Tinti, the 38-year-old poet, works with museums to create poems as tributes to specific art works, and he wrote the poem Spacey read as a tribute to the Greek statue the actor stood by Friday, “Boxer at Rest.’’

Tinti wrote “The Boxer’’ several years before sexual harassment and assault in Hollywood crystallized into scandals that cost Spacey and others work and their reputations. The poet told The Daily Beast he sent the poem to Spacey through a friend but never expected him to give a public reading.

Prosecutors in Massachusetts last month dropped an indecent assault and battery charge against Spacey after the accuser invoked his Fifth Amendment right not to testify about text messages the defense claimed were deleted. The man had accused the actor of getting him drunk and groping him when he was an 18-year-old busboy at a Nantucket restaurant.

The former “House of Cards’’ star is still being investigated in London and Los Angeles over several allegations and faces a federal lawsuit alleging he assaulted a massage therapist.