Call to boycott goes beyond beer

Call to boycott goes beyond beer 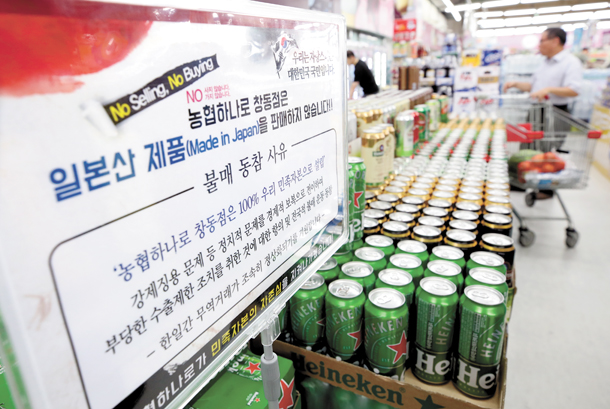 A notice in the alcohol isle of a Hanaro Mart in Dobong District, northern Seoul, says the branch does not sell “Made in Japan” products as part of a boycott. [YONHAP]

A simmering boycott of Japanese goods that began a month ago is expected to come to a boil.

Korean consumers showed their displeasure from the start by eschewing Kirin, Sapporo, Asahi and other Japanese beers, which have prominent places in Korean supermarkets and convenience stores’ coolers.

GS25 said Asahi was its top seller last year for 500 milliliter cans of beer. Last month, it slid to seventh place. Local brand Cass filled the void and took over the top place. The second and third best-selling products were Tsingtao from China and the Netherland’s Heineken.

In sync with their customers, convenience stores have been excluding Japanese beer from usual discount promotions for imported beers.

Fashion and cosmetics brands have also been affected by the boycott. Japanese label Uniqlo was one of most affected brands even though it released an apology after its chief financial officer unwisely said during an event for investors on July 11 that the impact of the boycott wouldn’t last long.

Sales of Uniqlo products at department stores fell roughly 30 percent last month, according to industry projections. Sales of Uniqlo’s Korean competitor TopTen saw a jump of 20 percent year-on-year last month. Many Uniqlo shops in central Seoul are empty. Some Koreans say they don’t want to be seen going into a Uniqlo.

“I was walking with a Uniqlo shopping bag, and I felt people, especially young people, staring at me,” said an office worker surnamed Kim who recently bought clothes from an Uniqlo shop in central Seoul.

Online, Koreans are trading tips on how to spot made-in-Japan items by their barcodes.

The first three digits of a barcode are country numbers designated by international standards organization GS1, and according to Korean netizens, Japan uses numbers 450 through 459 and 490 through 499.

Those are the products that should be shunned, Korean boycott champions advised.

GS1’s website stated, “GS1 prefixes do not identify the country of origin for a given product ... as GS1 member companies can manufacture products anywhere in the world.”

Another part of the boycott involves traveling to Japan, which has become a social no-no.

According to data from the Ministry of Land, Infrastructure and Transport, outbound travelers to Japan from July 16 through July 30 shrank by 13.4 percent to 467,249 people compared to between June 16 through June 30.

“The number of people who used Hana Tour packages to Japan shrank by 36 percent year-on-year last month,” a spokesperson from Hana Tour said. “As people tend to book travel from several months before their departure, the booking rate for August is shrinking faster compared to July, when it was harder for people to cancel imminent travel.”

As the demand to travel to Japan slows, airlines have started to react.

Korean Air on Thursday announced it will use smaller planes on its four routes to Japan departing from Incheon to Sapporo, Osaka, Fukuoka and Nagoya.

Changes for other routes come at different times and begin as early as Aug. 12.

Earlier in the week, the country’s largest airline announced its plan to temporarily suspend operations of a Busan-Sapporo flight that used to operate thrice-weekly from Sept. 3.

The country’s second-largest carrier announced last Tuesday that it will use smaller planes on flights to three major Japanese destinations: Osaka, Okinawa and Fukuoka.

Koreans are among the largest groups of foreign visitors to the neighboring country.