I loved the Evoque, but it never understood me

I loved the Evoque, but it never understood me 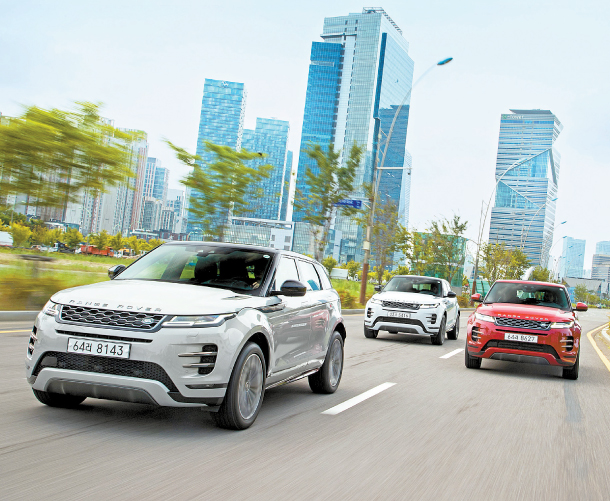 The smallest and youngest member of Range Rover’s SUV family received big compliments and major awards in its first iteration, and now, with the second-generation model, Jaguar Land Rover is seeking similar kudos and to solidify its reputation as a high-end SUV-specialized automaker.

I already had huge expectations for the Evoque before the test drive, as fellow auto reporters from other publications offered nothing but positive reviews after taking the SUV model on the road.

The Evoque was released early last month, but Jaguar Land Rover Korea did not hold a combined test drive event for reporters. Instead, the Korean unit of the British automaker decided to offer Evoques individually for reporters to drive, and some of my colleagues took the SUVs for a spin before me.

On July 26, after receiving the car from a local dealership, I took a white Evoque D18 First Edition trim out into pouring rain for a test drive.

During a 120-kilometer (75-mile)round trip from Cheongdam, southern Seoul, to Gapyeong, Gyeonggi, the newest release from the SUV maker proved that my colleagues weren’t lying after all. It ticked all the right boxes.

At first glance, Evoque’s lines suggest a car capable of attracting the young. The coupe-style curve works well with the sharp, horizontal headlamps. The frown-shaped bumper is in harmony with the postmodern grille.

Unlocking the door was a little confusing at first, as the door handles were not entirely present. With a slight push of a button on the door with the key, the door handle emerged and a circle of light guided my way.

Even though Evoque is a small-sized SUV, the interior is big. The four-door SUV is 4.37 meters (14 feet) long, 1.90 meters wide and 1.65 meters high, but it seemed that Jaguar Land Rover dedicated much of its time to making the compact-SUV spacious enough for drivers to feel comfortable.

The leather seats have a stylish seam and a rather luxurious texture, welcoming me as I moved the shift to drive and took the SUV on to the road.

Even though it poured throughout my test drive, Evoque provided a creamy, yet sharp on-the-road performance.

By changing the driving mode to “wet surface” using the Terrain Response 2 system, Evoque did not slip for a second when making hard turns on unpaved roads, and I could accelerate as much as I wanted during the drive without fear.

Pushing the I4 Turbo Diesel engine, this reporter thoroughly enjoyed the drive, even exceeding 130 kilometers per hour (81 miles per hour) in the downpour. The D180 First Edition trim boasts 180 horsepower and 43.9 kilogram-meters (318 pound-feet) in torque.

Yet it was a little disappointing to discover that the Evoque’s digital safety features were behind those of competitor models from Korea.

The lane-assist system was a little less responsive than the Hyundai Motor Venue’s, and alarms made sounds a second slower than they should have as vehicles got too close.

Considering that the D180 First Edition trim starts at 82 million won ($68,000), I wish Jaguar Land Rover paid a bit more attention to upgrading safety features for drivers, even though it is a given that its SUVs are probably not the choice for first-time drivers.

In a seeming bid to counter the less-than-positive reputations of infotainment systems in foreign cars, Jaguar Land Rover installed two separate displays within the Evoque and removed dozens of buttons and scrolls usually found in most cars.

It was impressive that the British automaker tried to go as tech-savvy as possible for drivers, and as a person used to single-display systems, it took some time for me to get used to it and find out which display does what.

To me, the dual-screen system was overkill, and I wish the automaker had focused on upgrading the software given response times were still an issue. The system was generally rather unresponsive, and menu selections and amendments came in at least one full second after pressing each button.

Jaguar Land Rover also boasted that the Evoque comes with a voice command system, but the system never understood what I ordered it to do.

The Evoque seems to be a promising option for SUV lovers to consider, as the compact SUV comes with an advanced design and stable on-the-road performance. Yet the weak digital features and some deficiencies in terms safety functions could hinder some from making it their choice.

The cheapest trim for Evoque starts at 68 million won, and the most expensive is priced at 82.3 million won.