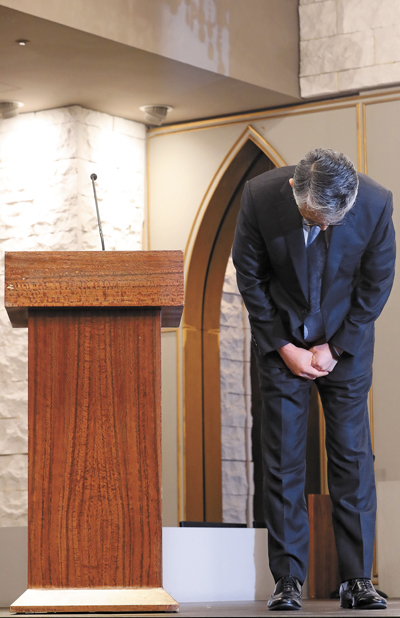 The Korean biopharmaceutical company announced during a press conference Sunday that it will halt the global phase 3 clinical trial for its anticancer pipeline Pexa-Vec therapy. SillaJen was advised early Friday morning by the Independent Data Monitoring Committee (DMC) to stop the trial, as Pexa-Vec failed to extend the lives of liver cancer patients using it.

The DMC, an independent group of experts that monitor treatment efficacy data, reviews clinical data for candidate drugs and judges whether they should be tested or approved. As one of the final stages of releasing Pexa-Vec to the global market, SillaJen started the phase 3 clinical trial for the drug in late 2015 on dozens of patients in Korea, the United States and New Zealand.

“I thought this day would be a day to happily announce the great progress of Pexa-Vec, but we were told the complete opposite, so we panicked,” said SillaJen CEO Moon Eun-Sang during the press conference.

“According to data from May 2019, there were 175 pharmaceutical companies around the world developing anti-cancer viruses, and even with this notice, we still believe SillaJen is one of the top three in the game.”

Pexa-Vec is an injectable genetically modified cowpox virus that selectively attacks cancer cells and stimulates patients’ immune response against cancer cells. SillaJen plans to submit the recommendation from the DMC to the U.S. Food and Drug Administration.

It was planning to conclude the trial by December 2020 after testing the liver cancer treatment on a total of 600 patients.

The red light from DMC is a major roadblock for SillaJen as the drugmaker was heavily dependent on the progress of Pexa-Vec, as other drugs it had in the pipeline were based on its efficacy.

Shareholders have been questioning if SillaJen knew of Pexa-Vec’s inefficacy and DMC’s analysis results early on.

As Shin sold the shares right before SillaJen was expected to unveil the analysis results of Pexa-Vec, shareholders questioned if the chief science officer and other executives were aware of the DMC’s analysis.

SillaJen denied the claims, saying the company had “no access whatsoever” to the DMC’s analysis.

“When global phase 3 clinical trial starts, we have no access to the DMC’s data and analysis results at all,” Moon added. “I emphasize that we never could have known them beforehand.”

The negative news from the DMC immediately hit the market. After the drug maker posted the regulatory filing, the share price for SillaJen on the secondary Kosdaq fell 29.97 percent to reach 31,200 won by Friday’s close.

The biopharmaceutical firm added it will also look into inking licensing-out agreements with other companies.