In Bangkok, Kang tries to pull nations onto Korea’s side

In Bangkok, Kang tries to pull nations onto Korea’s side 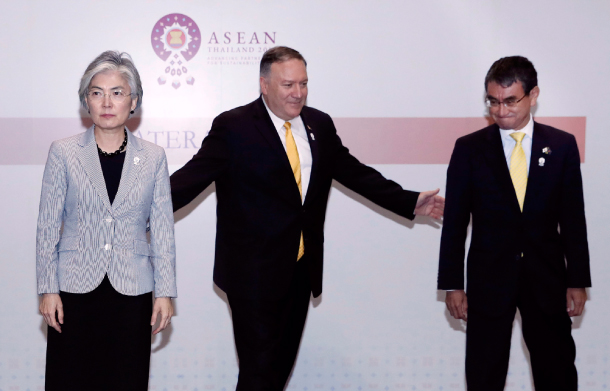 While Korea was unable to prevent Tokyo removing it from a list of countries offered preferential trade, Seoul’s top diplomat gained support for rules-based trading in a series of foreign ministerial meetings in Bangkok.

The Korean Ministry of Foreign Affairs on Sunday described the results of the series of Asean-related meetings and stated, “Regional countries actively expressed support for the peace process on the Korean Peninsula pushed for by the South Korean government and the need for an inclusive, transparent and rules-based free trade system.”

The “Asean Plus Three,” involving 10 Asean nations and Korea, Japan and China, met Friday and in a chairman’s statement released Saturday, said that foreign ministers, “cautioned against rising trade tensions and its impact on growth.”

The statement continued, “They expressed concern over the rising tide of protectionism and anti-globalization sentiments” and “reaffirmed their strong commitment to upholding an open, inclusive, transparent, and rules-based multilateral trading system anchored by the World Trade Organization.”

This is a contrast to the language used in the 2018 ministers’ statement, in which ministers simply reaffirmed their “commitment to maintain a free, open and rules-based trading system.”

During the meeting, after Kang expressed “grave concern” over the white list removal, Singapore’s Foreign Minister Vivian Balakrishnan remarked that Japan should not be reducing the number of countries on its white list, but rather adding Asean countries.

Japanese Foreign Minister Taro Kono, however, said he didn’t know what Kang’s complaint was about during the meeting.

The East Asia Summit also released a chairman’s statement that called for countries to “keep markets open, inclusive and competitive through the rules-based multilateral trading system,” and improve “transparency and predictability of the business environment,” language not used the previous year.

Similar language calling for a “rules-based multilateral trading system led by the WTO” was included in a statement from the Korea-Mekong meeting held Saturday, an issue not even addressed the previous year.

“We regard such statements as not only reflecting recognition by Asean and regional countries of the importance of an indiscriminate and fair trade system for continuous growth and prosperity,” said the Korean Foreign Ministry in a statement Sunday, “but also as an expression of these countries’ solidarity as a result of our government’s efforts to gain understanding of the importance of free trade through Japan’s trade restrictions.”

Tokyo’s white list announcement came despite Washington’s efforts to mediate the situation and try to work out a so-called standstill agreement to put off Korea’s removal and give some time for negotiation.

Kang held trilateral talks with U.S. Secretary of State Mike Pompeo and Japanese Foreign Minister Kono Friday evening after the Japanese cabinet announcement, an opportunity for her to voice her regret for Japan’s decision and to call for an immediate retraction of the action.

She also conveyed to Pompeo and Kono that Seoul is considering not renewing its bilateral military intelligence-sharing pact with Tokyo and added that the General Security of Military Information Agreement (Gsomia) “also plays an important part” in the trilateral information sharing between the three countries, according to a senior Foreign Ministry official Friday.

Pompeo’s only public remarks on Seoul and Tokyo was to reporters Thursday ahead of the ARF, when he said, “We’re very hopeful that those two countries will together themselves find a path forward, a way to ease the tension that has risen between them over these past handful of weeks.”

This year’s ARF chairman’s statement welcomed efforts by South Korea, the United States, China and Russia in sustaining dialogue with North Korea and “welcomed” the meeting between U.S. President Donald Trump and North Korean leader Kim Jong-un on June 30 at the demilitarized zone.

The Korean Foreign Ministry on Saturday issued a statement protesting through diplomatic channels a remark by Masahisa Sato, Japan’s state minister for foreign affairs, that President Moon Jae-in was “out of line,” as a verbal back and forth between the two countries escalated over the weekend.

The ministry added that such remarks “go against international courtesy and common sense to the point it can’t be seen as coming from a Japanese government senior diplomatic official.”