Abortions still being carried out in the shadows

Abortions still being carried out in the shadows 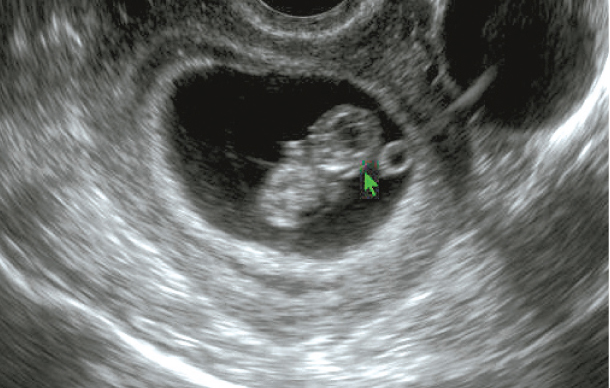 A sonogram of an eight-week-old fetus. [JOONGANG ILBO]

You’re seven weeks and five days pregnant, which means we can operate right away this evening when your husband accompanies you, said a hospital worker at a gynecology clinic in Gangnam District, southern Seoul.

An undercover JoongAng Ilbo reporter visited the clinic late last month, asking whether the hospital practices abortions. After answering a number of questions that included whether the reporter was married, when she last had her period and when she had sex, the hospital worker started calculating when she became pregnant.

The two were talking about an illegal abortion, as current laws only permit the procedure in certain circumstances.

These specific circumstances are laid out in Article 14 of the Mother and Child Health Act, giving “limited permission for induced abortion operations” in cases where the parents suffer from genetic diseases, the woman has become pregnant through rape or incest or in cases in which the birth of the baby “severely injures or is likely to injure the health of the pregnant woman.”

When the reporter said that she was “worried about any side effects,” the worker assured her that “in the hospital’s 10 years, there have never been any cases of accidents happening.”

In another gynecology clinic in Seongnam, Gyeonggi, the doctor who consulted with the reporter said she should “decide carefully.” However, he did not ask why she intended to have an abortion.

“The longer the pregnancy, the more dangerous it is to operate, and the costs go up,” said the doctor.

Soon, a nurse led the reporter to another room and talked about prices. 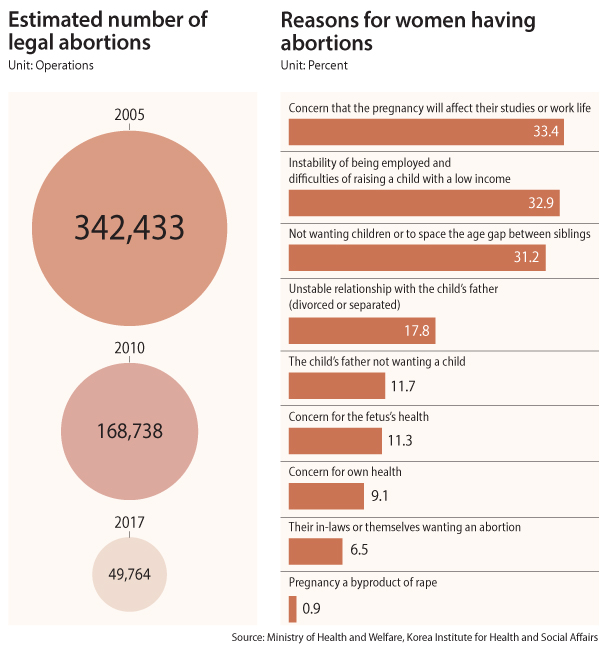 “Operations cost 600,000 won [$507],” said the nurse. “There are nutritional supplements that cost 50,000 won and 100,000 won.” The nurse also added that an additional 100,000 won was required if she wanted an “anti-adhesive agent” that would be applied to her uterus to prevent any infection from occurring.

Those further into their pregnancies must pay an extra 100,000 won, said the nurse. She also said they only accept cash and reassured her that “no records of the surgery are left.”

The deadline for the abortion law’s revision is just one year and four months away. In the meanwhile, abortion is still widespread and carried out in the shadows. Unfortunately, women are still unable to rely on legal surgeries to break free of unwanted pregnancies with the current law still in place. Current abortions being cash only, having no set price and capable of being finished in a day all endanger these women, as they are unprotected by laws.

The JoongAng Ilbo picked 20 gynecology clinics and hospitals in Seoul and Gyeonggi at random and either visited or called the facilities to ask whether they practiced abortions. Thirteen of them said that they do, and two said “they could do it after a consultation with the head doctor” and tried to induce the caller to visit their office. Only five clinics said outright that they do not perform abortions.

However, the prosecution has created a standard for how abortion cases are to be handled in the period before revisions are made, which seems to be an effort to curb collateral damage for women who have illegal abortions, which will most likely become legal in a couple of years.

According to the Korea Institute for Health and Social Affairs, 49,764 abortions were carried out in 2017 alone. The research based its findings on hospital records, which means that these statistics relate to legal operations. Since most abortions are estimated to be carried out illegally, it is suspected that the figure should be much higher.

To understand the number of abortions that are carried out legally and illegally, the Korea Institute for Health and Social Affairs conducted an online survey for nine months in 2018 on 10,000 women aged 15 to 44. Among women who were sexually active, 10.3 percent of them said that they have had an abortion, and for those who had experienced pregnancy, 19.9 percent admitted to having an abortion. Among women who had an abortion, 8.5 percent said that they experienced side effects like uterine perforation, intrauterine adhesions and habitual miscarriages. Another 54.6 percent said they suffer from guilt, depression, anxiety and suicidal thoughts. Only 14.8 percent of these people said they received treatment for these side effects.

Doctors are taking risks as well, as helping women in need illegally could lead to them being suspended for up to one month, sentenced to up to one year in prison or fined up to 2 million won.

“In a situation where the abortion law is still in effect, for doctors, there is great risk [in operating abortions illegally],” said Kim Dong-suk, chairman of the Korean College of Ob & Gyn, an organization that represents obstetricians and gynecologists. “It is inevitable for [abortions] to be operated in the shadows illegally.”

No doctor performs abortions because they like to - they do it to help women who become pregnant involuntarily, said a medical specialist who wished to maintain anonymity.

The government has yet to announce anything concrete on the matter. The Ministry of Health and Welfare, the Ministry of Justice and the Ministry of Gender Equality & Family have only responded that they are “preparing to make law revisions.”

“In the meantime, we have been analyzing the decision of the Constitutional Court and met with people from medical, legal and women’s advocacy groups and asked for their opinions,” said Son Mun-geum, the head of the childbirth policy department at the Ministry of Health and Welfare. “Because there are a large number of issues, it will take a lot of time.”

The National Assembly has also shown no particular movement in the past months to create a revision to abortion law. Other than the bill to abolish criminalizing abortions proposed in April by Lee Jeong-mi, a lawmaker from the opposition progressive Justice Party, there hasn’t been much movement towards creating more changes.

“With the National Assembly making slow progress, we were unable to start talks,” said a Democratic Party lawmaker who wished to remain anonymous. “With the general elections coming next year, there are no lawmakers who want to carry the ball, being conscious of religious circles lashing out.”

On the other hand, experts say that the National Assembly should hurry up and revise abortion law.

“In the gap until the legislation, abortions are a problem that is still left for women and doctors,” said Kim Dong-sik, a researcher at the Korean Women’s Development Institute’s department for gender policy research. “We need to apply health insurance [for abortions] to protect vulnerable women and manage the side effects as well.”