After 4 years, the Wiz is ready to play ball

After 4 years, the Wiz is ready to play ball 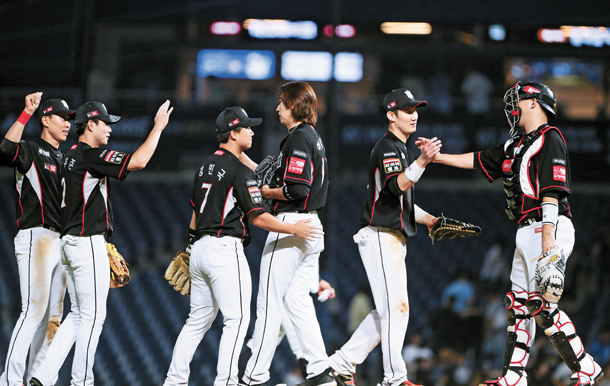 The KT Wiz has finally arrived.

Since the Wiz was promoted to the KBO in 2015, the Suwon-based club has consistently been the bottom-ranked team in the league. In its first three seasons in the big league, the Wiz finished dead last. In 2018, the fledgling team made a slight improvement, clawing its way up to ninth.

But things have taken a dramatic turn this year. The Wiz started the second half of the season last week at sixth, just behind the NC Dinos. Heading into the weekend two-game series just behind the Dinos, the Wiz finally had a shot at making it into postseason territory just as the competition really starts to heat up.

A 5-3 victory over the Kiwoom Heroes on Sunday gave the Wiz that much-needed momentum, pushing them through into fifth place.

As the Dinos lost 1-0 to the Kia Tigers, the two teams are tied in winning percentage, at 0.485, but the Wiz are ahead in the ranking as they’ve won more games, with 50 wins, a draw and 52 losses.

This is the first time since May 3, 2018, that the Wiz has been ranked fifth in the regular season standing. Looking at the Wiz’s performance in previous seasons, they have started strong by ranking toward the top of the leaderboard but quickly dropped to the bottom half of the table after the first month or two of the season.

In fact, this is the first time the team has ever been ranked in the top five after the month of June. Staying in contention in early August means the Wiz actually has a serious chance of making it into a postseason spot, even with some of the team’s starting players currently off the roster.

At the beginning of the season, the Wiz started in familiar territory, solidly in the bottom half of the table. But once the team moved up to sixth on June 29, it never looked back. Since a game against the Tigers on June 30, the Wiz played in 23 games and has won 15 while only losing eight.

During this time, the Wiz had the highest team batting average of 0.294 and a team ERA that was good enough to be ranked fifth, at 3.84.

Despite the absence of starting player Kang Baek-ho due to a hand injury, the Wiz has five batters who kept their batting average above 0.300 during this period. The Wiz is only expected to get better from this point, as Kang is expected to return soon.

Then, on the mound, they’re benefitting significantly from their foreign pitchers - Raul Alcantara and William Cuevas. Throughout 23 games, Alcantara started in five and picked up four wins while Cuevas added three.

In addition to the two foreign pitchers, the Wiz’s domestic pitchers - Kim Min-su, Kim Min and Bae Je-seong - picked up two wins each. Their bullpen is also going strong, with Ju Kwon and Jun Yu-soo each picked up eight holds. More than anything, the Wiz has seen big improvements from their new closer Rhee Dae-eun.

Rhee started the season as a starter but switched his position to closer after Kim Jae-yoon got injured. The switch was a success as he has already picked up 10 saves, nine of which came while the Wiz was in sixth place.

Along with the Wiz, the Lotte Giants also made an improvement over the weekend by finally moving off the bottom of the standing. With a weekend sweep against the Doosan Bears at Sajik Baseball Stadium in Busan, the Giants moved out of dead last for the first time in 74 days, since May 22.

The Giants are now 0.5 games ahead of the Hanwha Eagles.