Chung Hyeon made a successful return from injury by winning the International Challenger Chengdu in China on Sunday. 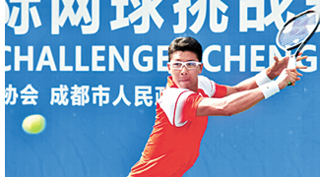 Chung defeated Yuichi Sugita of Japan 6-4 and 6-3 to win his 9th Challenger Tour. This was his first Challenger Tour win since the Tennis Championships of Maui in January 2017. More impressively, this was Chung’s first tournament in five months, since the 2019 ABN AMRO World Tennis Tournament in Rotterdam, Netherlands in February.

“I’m really happy because I missed the competition and I’m looking forward to playing even more,” Chung was quoted as saying on the ATP Challenge Tour website. “The weather here was really hot and humid and I played three long matches in a row. I was trying to stay calm all the time and fight for every point. It feels great to be back on court and without pain. I practiced really hard to get here.”

Chung has won one ATP World Tour victory in his career, the 2017 Next Generation ATP Finals, in Italy. By winning that first ATP Tour title, Chung became the first Korean tennis player since Lee Hyung-taik at the Adidas International Tour in January 2003 to win an ATP Tour event.

That was the start of Chung’s sudden rise to prominence in the world of tennis, a sport with very little following in Korea.

Last year, Chung, then ranked 58th in the world, made it to the semifinals at the Australian Open. He first shocked the tennis world by defeating Novak Djokovic in straight sets in the round of 16 and then went on to beat Tennys Sandgren of the United States in straight sets in the quarterfinals, becoming the first Korean to advance to the semifinals at a Grand Slam tournament.

Against Roger Federer in the semifinal, Chung withdrew during the second set due to pain caused by blisters.

Chung continued his success by reaching the quarterfinals at six consecutive tournaments, good enough to become the most successful Korean tennis player of all time by reaching No. 19 in the world ranking.

However, this year, he is having a less impressive season. Chung missed the majority of the season due to injuries and in tournaments he did compete in, he did not see any results.

“I missed a lot of tournaments and a few Grand Slams,” Chung was quoted as saying. “I fell out of the top 100 too. But my back feels great and that’s why I’ve come back now. I’m ready to go. I’ve been practicing, doing rehab and treatment since February. I’m happy to be back in Chengdu.”