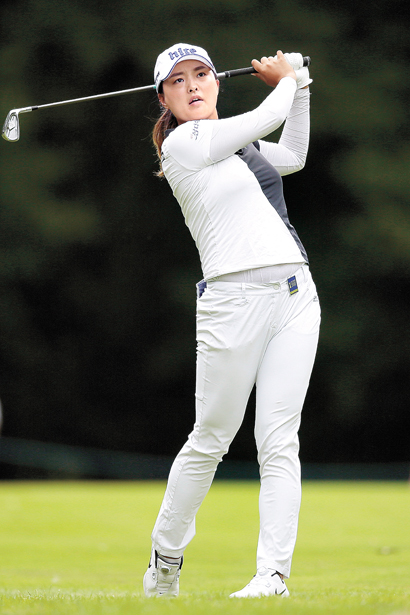 Ko Jin-young watches her shot during the final round of the AIG Women’s British Open at Woburn Golf Club in Britain on Sunday. [AP/YONHAP]

After coming up short in a bid for a piece of LPGA history on Sunday in Britain, Korean star Ko Jin-young said she was still satisfied with her effort.

Ko finished alone in third place at the AIG Women’s British Open at Woburn Golf Club in Milton Keynes, England, with a four-round total of 16-under 272. Despite carding a bogey-free 66 on the final day, Ko finished two strokes behind the champion, Hinako Shibuno of Japan.

Ko was trying to become only the fifth player in LPGA history to win at least three majors in one year, the feat last accomplished by fellow Korean Park In-bee in 2013. Ko had earlier won the ANA Inspiration in April and then captured the Evian Championship last week in France.

The consolation prize for Ko is that she will get to stay at No. 1 in the world rankings for at least another week. Ko dethroned Korean Park Sung-hyun last week after her Evian Championship victory.

“I am really grateful just for the chance to win three majors in one year,” Ko said. “I did the best I could, and I simply ran out of luck. When someone else plays well to win, there’s nothing I can do about it.”

Ko started the final round four shots back of Shibuno, the overnight leader at 14-under. After opening with four consecutive pars, Ko dropped in three straight birdies to jump into contention. Three more birdies came on the back nine for Ko, who said she’d give herself a grade of “99 out of 100” for her play Sunday.

“If I had to go back and play this round again, I’d play it exactly the way I played today,” she said. “I didn’t have any bogeys or make any mistakes. I’d like to pat myself on the back.”

As for taking a crack at winning three majors, Ko said, “Maybe I could win four majors (out of five) next year, who knows.”

By winning two of the five majors in 2019, Ko also clinched the Annika Major Award. Named after the former LPGA legend Annika Sorenstam, the award is given to the player with the best overall record at major tournaments each year.

Ko said the award serves as a validation.

“When I was playing in Korea, a lot of people said I wasn’t good enough to win LPGA majors, and I felt the same way,” Ko said. “I’ve been able to perform so well at majors because I’ve listened to people’s advice and put in a lot of work. This award means a lot to me, but I know I still have plenty of room for improvement. I can’t wait to see how my game will grow in the future.”

On the PGA Tour, An Byeong-hun was hoping to pick up his first win but just came up short by finishing third at the Wynham Championship at Sedgefield Country Club in Greensboro, North Carolina on Sunday.

An, who was the leader throughout the first three rounds, shot 67, three under par, to finish two shots behind the winner J.T. Poston of the United States.