84% of office workers say it makes them sick

84% of office workers say it makes them sick 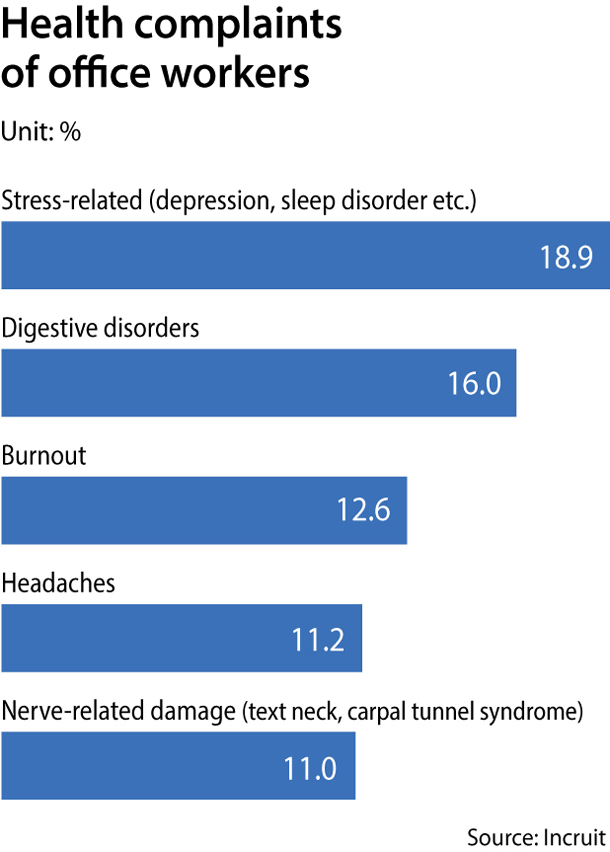 Four out of every five Korean office workers say their job has a negative effect on their health.

According to a survey conducted by job search website Incruit, 83.9 percent of 671 respondents said that working has a negative effect on their health.

By age, people in their 40s believe they suffer the most - 87.7 percent of this age group said they were suffering from health problems.

Burnout was offered as a separate option from stress-related symptoms, receiving 12.6 percent of the vote.

The list went on to frequent headaches (11.2 percent) and nerve-related issues like text necks and carpal tunnel syndrome which refers to pain or numbness in the fingers or wrist (11 percent). Lower ranked answers included sudden weight loss or gain (9.6 percent) and respiratory diseases (4.5 percent). Multiple answers were allowed.

The questionnaire also asked when they feel their body isn’t in a healthy state at work.

Twenty percent said they felt their body shape and posture has been negatively affected.

Fifteen percent said they experienced symptoms that they never had before starting work and 13.9 percent said they feel like they are sick more often or their weight is suddenly changing. Multiple answers were allowed.

Nineteen percent said they believe the main reason was lack of exercise. Stress from peers or senior employees ranked second with 15.8 percent of votes. An unhealthy work environment and work intensity both came third at 13.1 percent. Multiple answers were allowed.