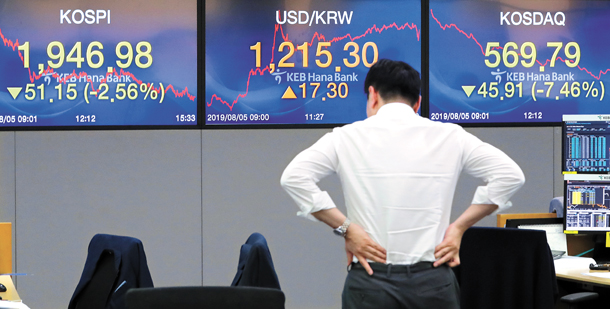 A board at KEB Hana Bank in central Seoul, Monday, shows the stock markets and the won falling on worries over the intensifying trade war between Korea and Japan. For the first time in more than three years, a sidecar was activated on futures trading. [YONHAP]

As the won and stocks were falling, and as trading was halted in the futures market, the government insisted the situation wasn’t so bad, and then warned people not to exaggerate the severity of the crisis.

“It’s fake news that Korea is facing a financial crisis as serious as the IMF,” crisis, a senior Blue House official said Monday, referencing the 1997 collapse which required a bailout from the International Monetary Fund (IMF).

He added that the Blue House has been monitoring the economy in general, not just the component and material industries threatened by Japan’s trade restrictions, and was preparing various countermeasures.

The Moon Jae-in administration warned about erroneous news reports regarding the removal of Korea from the “white list” and its impact on Korean industry. The official said reports of this kind would only fuel uncertainty in the market, and that that is exactly what Japan is trying to do.

For the first time in more than three years, a “sidecar” was triggered on the Kosdaq 150 futures market, with transactions suspended for five minutes, after it tumbled more than 6 percent, at 2 p.m.

The last time a sidecar was used in the tech-heavy junior market was on June 24, 2016.

But it wasn’t only the secondary market that suffered.

The Kospi has been falling for four consecutive trading days and is down by 4.5 percent.

Since July 1, when the Japanese government made its economic retaliation against Korea known, the Korean stock market has lost 8.6 percent of its value.

It was the first time the won has broken 1,200 against the dollar in more than two and a half year. Market experts project the won to further depreciate. Some see the won falling to 1,250 won to the dollar.

“Japan on top of crossing Korea from its white list could add additional restrictions against Korea in the financial area,” said Chang Jae-chul, KB Securities analyst. “The won could depreciate to as much as 1,220 won if Japan strengthens its restrictions.”

The analyst said the won value could drop to as much as 1,250 won if the U.S. goes through with its plans of slapping additional tariffs on China as a result of failed negotiation.

“It will be inevitable for the financial authority [Bank of Korea] to intervene since the sharp depreciation of the won to over 1,200 won could destabilize the economy and the financial market,” said Lee Sang-jae, a Eugene Investment & Securities analyst. “However, [the intervention] will only be able to slow the speed of depreciation, and it will not be able to change direction.”

Financial regulators sought to calm the market by stressing that the Japanese actions will not change the view of investors on the Korean economy.

“The uncertainty in the market has increased as the exclusions of the white lists have been added amid a worsening external economic environment, including the trade conflict between the U.S. and China and the Japanese restrictions on semiconductor materials,” said Sohn Byung-doo, Financial Services Commission (FSC) vice chairman. “But since most of the exclusion from the white lists have been reflected in the market earlier and as the government and the private sectors are doing its best in handling the issue, there’s no need to feel anxious.”

The FSC vice chairman stressed confidence in the economic fundamentals, including stable capital inflows and the pricing of credit default swaps (CDS), which gauge the creditworthiness of sovereign debt.

According to the Bank of Korea, foreign reserves as of July totaled $403.1 billion.

The FSC vice chairman also noted that the short-term external debt to foreign reserve ratio as of March was at 31.6 percent, which is far below the 84 percent during the 2008 financial crisis or the 286.1 percent during the IMF crisis of the late 1990s.

“It seems there’s no major change in the evaluation of global investors on the Korean financial market,” Sohn said. “Yet the financial authority will continue to remain alert while monitoring the situation closely. When needed, we will act swiftly and boldly accordingly to a prepared contingency plan.”

Experts say despite the government’s efforts, the situation isn’t likely to turn around anytime soon.

“We’re in a situation where there’s a lot of bad news and no good news,” said Kim Yoo-kyum, Cape Investment & Securities analyst.