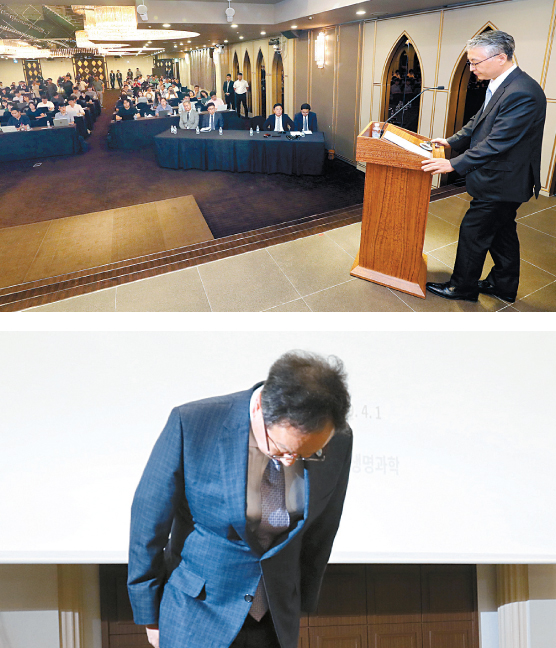 In Korean biotech, it’s been one disappointment after another, raising concern that one of the future engines of growth will turn out to be a destroyer of capital and killer of dreams.

Clinical trials have disappointed. Contracts have been problematic. Alleged lies and material omissions have been uncovered. In some cases, prosecutors have been called in, and share prices have been invariably weak, with angry investors in near riot at times.

Some analysts are talking about a bubble, the second in the sector in less than half a decade.

SillaJen is just the latest to let Korea down.

The biopharmaceutical company was aiming for a future in anti-cancer therapies. But on Sunday, during an emergency press conference, SillaJen said it would be halting clinical trials of its liver cancer therapy Pexa-Vec after it was told by an independent data monitoring committee (DMC) that those steps should be taken because the treatment does not seem to work.

Pexa-Vec is an injectable genetically modified cowpox virus made to selectively attack cancer cells and stimulate immune systems of patients. It is the company’s cornerstone development on which its fortunes seem to depend.

The rest of its new drug pipeline was based on the efficacy of the liver cancer treatment.

Shareholders were furious, demanding SillaJen come up with a strategy to protect their interests, but the company was adamant, with CEO Moon Eun-sang insisting: “Pexa-Vec works, and I can assure you that.”

SillaJen has come up with a solution. It said it will work to sign out-licensing agreements with global pharmaceutical companies to officially release Pexa-Vec to the market.

Yet it is unclear at this point whether anyone will be interested in partnering on a drug that was negatively rated by authorities. Company officials only kept repeating the plan without offering details.

The disappointment was reflected in the stock price. The company’s shares fell 29.97 percent to 21,850 won ($18) Monday after dropping to its daily limit on Friday.

SillaJen is just the latest in a series.

Last month, Hanmi Pharmaceutical got a Dear John letter from its business partner. Janssen Pharmaceutical said it was canceling a $915 billion agreement made in November 2015 and was returning the development rights for HM12525A, an experimental drug. Phase 2 clinical trials had not yielded satisfactory results.

Although it proved effective in reducing the body weight of diabetics, HM12525A did not lower the blood sugar of obese diabetic patients as much as Beerse, Belgium-based Janssen set in its internal standards.

This is not Hanmi’s first rejection. Indianapolis, Indiana-based Lilly returned the licensing rights back to it for a tyrosine kinase inhibitor, a deal that had been worth $690 million. In 2016, Ingelheim am Rhein, Germany-based Boehringer Ingelheim canceled a yearlong collaboration that could have brought up to $730 million to the Korean drugmaker. 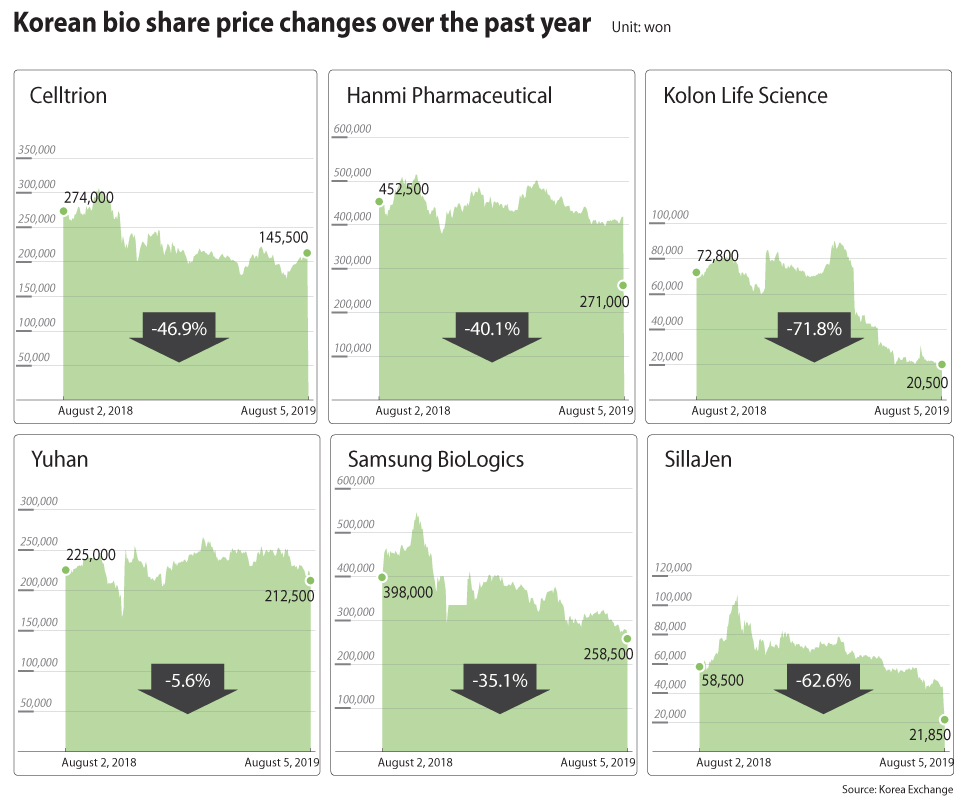 For some companies, the trouble only begins when products disappoint.

After its highly anticipated Invossa was taken off the market following a ruling from the Ministry of Food and Drug Safety, Kolon Life Science faced criminal prosecution on charges of fraud.

Invossa was approved by Korean authorities in 2017. The license to make it was revoked last month after it was found that Kolon Life Science filed false documentation for its approval.

The gene therapy drug for knee osteoarthritis was approved on the basis that cartilage cells were used in its production when in fact kidney cells were used.

The drug was taken off the market in April after the company revealed the presence of the errant cell lines.

Some evidence suggests that Kolon Life Science knew of the errant cells at least two years before they claimed to have known, and prosecutors have been calling in its executives for questioning while raiding its offices.

Meanwhile, the Korea Exchange has officially initiated the process of delisting Kolon TissueGene, the subsidiary of Kolon Life Science tasked with developing Invossa. Since last month, Kolon Life Science has been fighting the ministry in court to reverse the ruling that revoked Invossa’s license.

Prosecutors have also been investigating Samsung BioLogics, as they suspect that the company intentionally violated accounting rules to inflate the value of its Samsung Bioepis subsidiary ahead of a Samsung BioLogics initial public offering in 2016.

Loss-making Samsung BioLogics suddenly reported profits in 2015 after changing the calculation method for determining the value of the subsidiary. The prosecution has already raided the Samsung BioLogics headquarters and Korea’s main stock exchange and has arrested some company executives and employees in relation to the case.

Officials are expanding the probe as they believe that the Samsung Group as a whole may have been involved in the accounting scandal.

Is this a bubble?

The market is now negative on the sector as a whole.

“Investor sentiment has turned icy cold on bio and pharmaceutical shares that have stood as major players on the Kosdaq,” said Jung Hun-seog, an analyst at Korea Investment and Securities.

“What’s even worse is that despite the huge fall, Kosdaq’s bio shares still have not much to appeal to investors in terms of quarterly results or valuations.”

The index fell 7.46 percent just on Monday, and program trading of shares listed on it was briefly halted during the day.

Some analysts believe that the sector may be in a bubble - a bubble that formed quickly after one just popped.

“One thing we have to remember is that after the collapse of bubble under the health care industry, which formed between 2015 and 2017, starting second half of 2017, shares started rising again,” wrote Ha In-hwan, an analyst for Meritz Securities, in a report.

“It is the coming of second bubble.”

From 2017 to now, health care-related shares rose around 130 percent and then sharply fell around 30 percent, Ha says, which is similar to the pattern that was observed between 2015 and 2017.

Ha added that the decline will “definitely” continue for the next three months. It is not clear if the sector could ever recover, as investors may have given up due to the slow progress made by Korean biopharmaceutical companies.

Should investors lower their expectations?

Some industry watchers say that the problem may be less with the companies and more with the investors. Their expectations are simply too high, as they expect every drug in development to be approved.

Phase 3 is night and day when compared with Phase 1 and 2, and investors should keep the Champagne corked until final approval is received, they advise.

They say that Phase 3 clinical trials are vastly different than Phase 1 and 2 trials, and investors should stay conservative until a drug wins final approval from the authorities.

“Investing in a company that is developing a new drug is same as making a decision on the premise that the drug is highly likely to be successful,” wrote Lee Tae-young, a biopharmaceutical industry analyst at KB Investment & Securities, in a report.

“Accordingly, investors need to lower their expectations and remember they might be investing in a drug that might not be real.”

The road to approval is a long one, and on the way, significant funds must be invested.

“Probably the safest course of action is for biopharmaceutical companies not to develop drugs and investors not to invest in companies making new drugs,” Lee added.

He believes that investors should pay more attention to whether new drugs statistically fulfill the approval requirements set by drug authorities. Even if a drug does seem to work, if it does not statistically prove its efficacy, approval might never come.

The U.S. Food and Drug Administration requires new drugs to achieve a margin of error of less than 5 percent, as a larger error could endanger the lives of patients.

“If the error is more than 5 percent, the authorities will not even accept the approval application,” Lee added. “Approving officials make evaluations focusing on the integrity of statistical analyses of candidate drugs.”

Hope remains for some, especially as many more drugs are in the pipeline, and some winners are possible.

Just as some companies are failing and failing dramatically, it is possible that others are doing well.

Last week, Celltrion said it will begin Phase 3 clinical trials for Remsima SC in the United States after receiving the nod from the U.S. Food and Drug Administration for the biosimilar to be exempt from Phase 1 and 2 clinical trials.

The company has said that it aims to launch one biosimilar drug in the market every year through 2030, as it is currently developing more than 15 follow-up biosimilars. The company has so far commercialized Remsima, Truxima and Herzuma.

Yuhan has been a relatively stronger performer.

Yuhan signed a technology transfer and drug-development deal with Boehringer Ingelheim worth up to $870 million last month on its treatment of non-alcoholic steatohepatitis.

Over the past year, Yuhan has signed four technology export agreements and brought in more than 100 billion won alone in down payments, twice the amount it made in operating profit last year.

Importantly, the government is supporting the sector.

The Ministry of Trade, Industry and Energy said in May that it will ease regulations and provide R&D funds to triple the global market share of Korean biopharmaceutical companies to reach $50 billion won in exports and create 300,000 jobs in the sector by 2030.

Songdo is home to the headquarters of Celltrion and Samsung BioLogics.