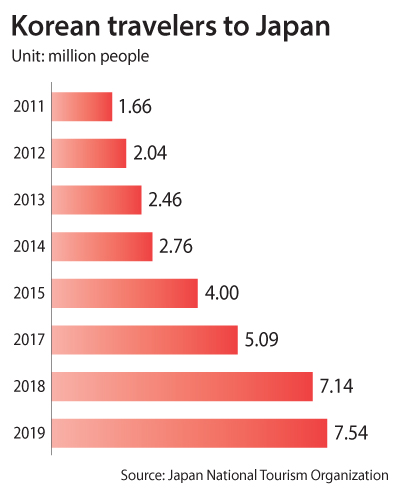 A top ruling party lawmaker said Monday that the government must impose travel bans on large areas in Japan, including Tokyo, citing health risks from high radioactive levels, as a means to counter Japan’s economic retaliations.

“We need to impose travel bans,” said Rep. Choi Jae-sung of the Democratic Party (DP), chairman of the in-house special committee on countermeasures against Japan’s economic retaliations. “We need to consider [imposing travel bans on] areas including Tokyo.”

Choi made the recommendation during an interview with MBC radio as he discussed Korea’s possible countermeasures against Japan. In July, Tokyo tightened export restrictions on three materials crucial for Korea’s semiconductor and display productions.

Last Friday, Tokyo escalated the row further by taking Korea off of its so-called white list of 27 trusted trade partners.

“I cannot say the specifics of the countermeasures we are currently considering, but there are various options,” Choi said. “And we have non-economic options. Japan is making economic and industrial [attacks], but we can take non-economic measures.”

According to Choi, the radiation level in Japan is an example of an area where Seoul could enforce countermeasures. “It is, of course, indirectly linked to the economy,” he said. “For example, it can be related to travel. So, we have reviewed non-economic measures that Japan cannot reciprocate on or that will actually hurt Japan more even if it does.”

Hours after the Japanese cabinet approved a plan on Friday to take Korea off its white list, the Korean government also decided to remove Japan from its own list of trusted trade partners and impose regulations on tourism and food imports.

Deputy Economic Prime Minister Hong Nam-ki has said the government will reinforce safeguard measures to protect the people’s safety, starting from the tourism industry and imports of food and waste from Japan.

As of now, the Foreign Ministry is maintaining an evacuation recommendation for the area within a 30-kilometer (18-mile) radius of nuclear plants in Fukushima and the evacuation order zones designated by the Japanese government.

According to Choi, restricting imports of agricultural and fisheries products from Fukushima and restricting travel to the region are also possible countermeasures.

“Travel bans, in particular, need to be imposed,” Choi said. “And we must include Tokyo, because radiation levels in the city were recently four times higher than the standard.”

Choi also hinted at the possibility of linking travel bans with next year’s Tokyo Summer Olympics.

“Unrelated to the Olympics, we must impose travel bans to the areas where radiation levels are higher than the safety standard and cause risks to the people’s safety and health.”

Choi also sneered at the Japanese Foreign Ministry’s decision to issue a safety warning on its web site on Sunday that travelers to Korea must be cautious of anti-Japan demonstrations in Seoul and Busan.

Choi said despite the Tohoku earthquake and tsunami in 2011 and subsequent radiation pollution, Seoul did not issue any travel bans, but if it does, it will be a powerful measure that will make Japan suffer.

“Every year, 7.5 million Koreans visit Japan,” Choi said. “So, imposing travel bans is the top priority countermeasure we must take.”