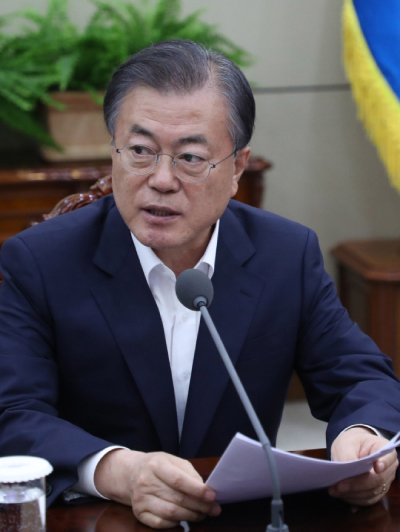 President Moon Jae-in presides over a meeting with his senior secretaries at the Blue House on Monday. [YONHAP]

In a meeting with senior presidential secretaries, Moon said the trade war with Japan should be used as an opportunity.

“We must not stop at merely overcoming Japan’s trade retaliation but proceed further to adopt an even wider perspective and summon an unshakable resolve that will help us surpass the Japanese economy,” Moon said.

“The recent incident [of Japan’s economic retaliations] reaffirmed our sense of the urgent need to create a peace-driven economy,” Moon said, referring to his stated vision of prosperity for both Koreas based on eased military tensions. “The Japanese economy holds advantages over the Korean economy in terms of its size and the size of the domestic consumer market. The realization of a peace economy through inter-Korean economic cooperation will allow us to immediately catch up with Japan’s advantages.”

Moon said this vision of a peace-driven economy must not be abandoned even when inter-Korean relations or North Korea-U.S. relations go through periods of strain.

“Since there have been many years of confrontation and distrust, this will only become reality when we recover mutual trust through persistent efforts,” Moon said.

“When the two Koreas make concerted efforts with the confidence that a peace economy will open up a unique future of opportunities for us, we will be able to achieve denuclearization and peace on the Korean Peninsula and bring about common prosperity upon this foundation,” Moon said.

It remained unclear how Moon’s administration will restart inter-Korean economic cooperation projects in the face of international sanctions and the Kim Jong-un regime’s recent resumption of military provocations. The North recently carried out three missile tests within eight days - and bluntly said they were a message to the South.

“The president said a peace economy with the North is critical for victory in an economic war against Japan,” Kim said in a posting on Facebook. “The idea is just so random.”

He said Pyongyang even turned down Seoul’s offer of humanitarian aid of rice while firing missiles and issuing insults at Moon. “We wonder when and how a peace economy with Kim Jong-un is possible,” he said.

Rep. Jun Hee-kyung, spokeswoman of the conservative main opposition Liberty Korea Party, also criticized Moon’s idea. “Japan’s economic retaliations are the reality in front of us, but the president’s countermeasure is the fantasy with North Korea’s Kim Jong-un that he always dreams about.”

On Monday, Moon did not refrain from condemning Japan, although his language was toned down from last week.

He said the Shinzo Abe administration is hurting the people of both countries despite their efforts to overcome a bitter history. He said the international community is critical of Japan’s recent moves against a free trade order.

“Korea will raise its stature as a peaceful nation and a cultural powerhouse and usher in a new future as an economic force on the foundation of a moral high ground and a mature democracy,” Moon said.

Moon also said the recently passed supplementary budget as well as next year’s budget will focus on policies designed to outstrip Japan.

“I believe that stepping up innovative growth in this manner and expanding our economic sphere will be the fundamental solution,” he said.

“Rather, it will only serve to inspire us to fortify our resolve to become an economic powerhouse.”

Kim is reportedly meeting executives of Samsung, Hyundai Motor, SK, LG and Lotte groups, and the meeting will likely take place on Thursday.

Meanwhile, a senior presidential aide said Monday that a trilateral summit among the leaders of South Korea, China and Japan is being discussed among the three countries.

“It is a routine summit, and we are currently coordinating the schedule,” the official said.

Japanese and Chinese media reported Sunday that Seoul, Beijing and Tokyo are discussing a plan to hold the annual trilateral summit in China in December. The meeting is attended by the South Korean president, Japanese prime minister and Chinese premier. The last meeting took place in Tokyo in May 2018.