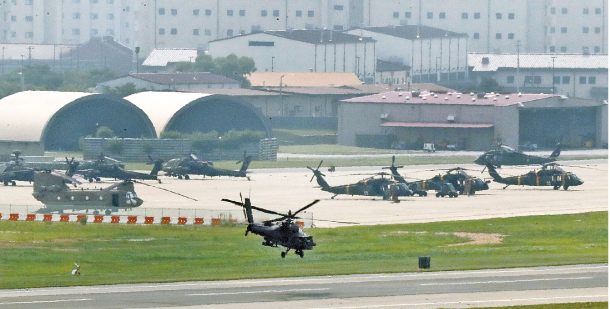 South Korea’s catalog of joint initiatives with the North remains stuck in a rut as its combined military exercises with the U.S. kicked off on Monday.

Seoul’s summertime command post exercise with Washington, identified by the media as 19-2 Dong Maeng, is particularly important to the country as it will be used to gauge South Korea’s readiness to take over wartime operational control, or Opcon.

As important as Opcon is for the Moon Jae-in administration’s platform of defense reform, the drills also put at risk the government’s signature policy ? rapprochement with Pyongyang.

On July 26, a day after the North test-fired what appeared to be two short-range ballistic missiles, Pyongyang said via its state media that the test was “a solemn warning to the South Korean military warmongers who are running high fever in their moves to introduce the ultra-modern offensive weapons into South Korea and hold military exercise in defiance of the repeated warnings.”

Following up this provocation, North Korea temporarily turned down the South’s offer to provide food aid last month and rebuffed calls for another inter-Korean summit, even after North Korean leader Kim Jong-un appeared to agree to a sit-down during his snap meeting with South Korean President Moon Jae-in and U.S. President Donald Trump at Panmunjom in late June.

According to the Ministry of Unification on Monday, civilian exchanges between South and North Korea have also grounded to a halt at present, with Pyongyang declining to hold a joint ceremony to commemorate Korea’s liberation from Japanese rule on Aug. 15. South Korean company Hyundai Asan’s request to hold a ceremony for its late chairman Chung Mong-hun at the Mount Kumgang resort in North Korea was also rebuffed by the North. Chung had spearheaded the now-suspended inter-Korean tour program at Mount Kumgang, where his company held memorial services every year after he took his own life in 2003. A ministry official added, however, that there have been informal meetings between figures on both sides at public events outside the Korean Peninsula, like during a recent international forum held in Manila, where delegations from both Koreas and other countries discussed issues related to forced labor and sexual slavery by Japan during World War II.

Seoul is also pursuing various other forms of exchanges with the North for the near future, like a joint excavation of historic areas in the demilitarized zone and sports events like a qualification match for the 2022 FIFA World Cup between the two Koreas in Pyongyang. The two sides also agreed last year to field joint sports teams in events like rowing for the 2020 Summer Olympics in Tokyo, and preparations are underway for working-level talks.

Yet it remains to be seen how much progress can be made on political reconciliation between the two sides, with Pyongyang holding back from resuming talks with Washington on its nuclear program because of the joint drills.

“The North appears to have kicked off a review into its military capacity [with its weapons tests] using the South Korea-U.S. joint military exercises as an excuse,” said a government official in Seoul, who asked not be named. “[Progress on] inter-Korean relations looks like it can only improve after the drills are finished.”

Pyongyang has not responded to Seoul’s inquiry on whether it is ultimately willing to accept the latter’s food aid, which was offered in the form of 50,000 tons of domestically grown rice in July. Some in the South Korean government believe that given its alarming food insecurity, the North is merely holding out until the end of the South’s joint military drills before accepting the aid.