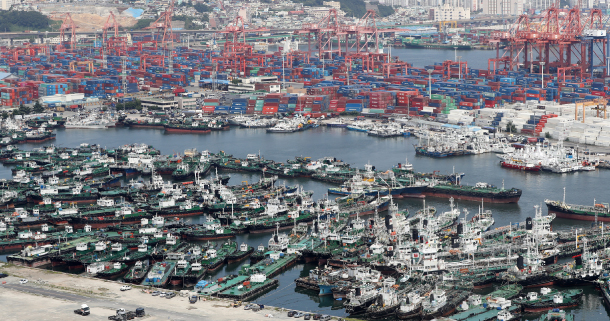 Boats anchor inside an inner pier in Busan on Monday to evade possible damage from Typhoon Francisco, which is forecast to pass through Japan on Monday night, landing near Tongyeong, South Gyeongsang, Tuesday night. [YONHAP]

The heat wave that has killed at least two people in the past week may lift temporarily as a typhoon hits the southern part of Korea today, said the Korea Meteorological Administration (KMA).

“Heat wave warnings have been issued in most of the country, and the daytime temperature on Tuesday is expected to climb to 35 degrees Celsius [95 degrees Fahrenheit] in most areas,” the KMA said on Monday.

“But incoming Typhoon Francisco is expected to bring rainfall from Tuesday afternoon into Wednesday and is expected to lift the heat wave in some areas of the country.”

Typhoon Francisco, a typhoon with a maximum wind speed of 27 meters per second [60 miles per hour] as of Monday, was forecast to pass through Japan on Monday night, landing near Tongyeong, South Gyeongsang, Tuesday night.

It is expected to move north toward Gangneung, Gangwon, by Wednesday afternoon, through Sokcho, Gangwon, on Wednesday night and move into the East Sea by Thursday morning.

The KMA said the typhoon is expected to weaken as it travels across Korea but that it will bring over 200 millimeters (7.9 inches) of rainfall in the coastal region of South Gyeongsang and Gangwon regions from Tuesday to Wednesday and 10 to 60 millimeters of rain in Seoul, Gyeonggi, South Chungcheong and Jeolla regions.

Temperatures climbed to dangerous levels over the weekend and into Monday.

A total of 855 people suffered from heat-related illnesses, and two people died as of Saturday, according to the Korea Centers for Disease Control and Prevention (KCDC).

The highest temperature in Gimcheon on Friday was 35.6 degrees Celsius, and in Goryeong, it was 35.4 degrees Celsius. Authorities temporarily concluded that the two women died of heat stroke.

The Central Disaster and Safety Countermeasures Headquarters, an agency operated by the Ministry of the Interior and Safety, activated on Saturday the first-level heat wave emergency response out of its three-tier system.

It was the first time the measure was activated since the government designated heat waves as potential national disasters last year.

The first-level response entails strengthening cooperation between central and local governments to provide additional care to elderly citizens to prevent heat strokes and other heat-related illnesses.

The KMA also warned about the so-called tropical night phenomenon.

A tropical night is defined as when the temperature in an area remains higher than 25 degrees Celsius throughout the night.

Power outages are possible during such nights due to concentrated use of electricity for air-conditioning.

From Sunday night to Monday morning, one apartment complex of some 600 households in Goyang, Gyeonggi, lost power for some six hours.

Another apartment complex in Incheon, housing some 400 households, lost power for a few hours the same night.

“We expect power usage to reach its peak around the end of August,” said Choi Hong-seok, head of the power planning division at Korea Power Exchange, a governmental agency that works with Korea Electric Power Corporation to manage power usage at major industrial complexes throughout the country.

“We are preparing for the peak season, as most of the power plants except a few undergoing repairs are ready to generate power,” Choi said.