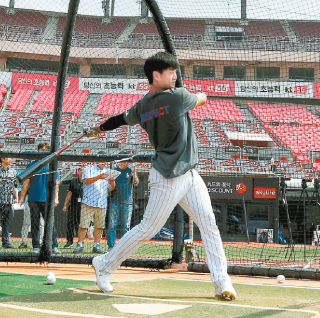 He started playing baseball in third grade and went all the way up to college. But before completing his freshman season at Hongik University in western Seoul in 2013, Son dropped out.

After a few months of working odd jobs away from baseball, Son signed a minor league deal with the Chicago Cubs in April 2014. The infielder even dabbled at pitching in rookie ball, but he was released before the 2017 season.

Son, 24, returned home to complete his mandatory military service and played independent baseball. He came to the tryout at KT Wiz Park in Suwon, 45 kilometers (28 miles) south of Seoul, on Monday, hoping to get noticed by the KBO scouts before the Aug. 26 draft.

Son understands his history of quitting organized baseball could work against him.

“I dropped out of school because I found playing baseball really tough at the time,” Son said. “I know it could haunt me, and I humbly accept that. And I think I can erase that history if I play with urgency and desperation. Baseball is the only thing I know how to do.”