Ko is ‘a little surprised’ by how well she’s done

Ko is ‘a little surprised’ by how well she’s done

Two-time LPGA major champion Ko Jin-young is taking nothing for granted - not even her multiple titles or support from her fans. 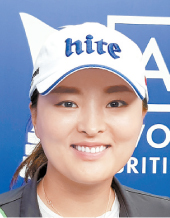 “Honestly, I am a little surprised by how well I’ve done,” Ko said in a statement released by her agency, Galaxia SM, on Tuesday. “My goal wasn’t to win tournaments but to improve my overall game. I think I’ve been fortunate. I’ll try to stay grounded and continue to give fans something to cheer about.”

Ko, ranked No. 1 in women’s golf, was scheduled to return home later Tuesday to compete at a local tour event, following a memorable two-week stretch in Europe. She won the Evian Championship, the fourth major tournament of the LPGA season, on July 28 in France and climbed to No. 1 in the world rankings. The very next week in England, she put on a final round charge before finishing third at the AIG Women’s British Open, the last major of the year.

“During the final round at the British Open, I had so much support from fans even though I didn’t win the title,” Ko said. “It made me realize fans don’t just want to see me win all the time. It inspired me to do the best I can at every tournament.”

Ko had won the ANA Inspiration, the season’s first major, earlier in April. With two victories and a top-three finish at five majors, Ko received the Annika Major Award. Named after the retired LPGA legend Annika Sorenstam, the award is given to the player with the best overall record at major tournaments each year.

She’ll look to stay hot this week in the southern resort island of Jeju, where she will compete in a Korea LPGA Tour event, Jeju Samdasoo Masters. It will be Ko’s first appearance on the Korean tour this year. She is the 2017 champion of that event.

“To me, the Jeju Samdasoo Masters is as important as the Evian Championship,” Ko said. “I’d like to win it again.”

After this week, Ko plans to take some time off with her family in Korea before flying to Canada for the CP Women’s Open starting on Aug. 22.

With the strength of her two major titles and three tour wins overall this year, Ko is the money leader with over $2.2 million. No one else has made more than $2 million.

Ko is also the scoring leader with an average of 69.034 strokes per round. In the race for the Player of the Year award, Ko has earned 207 points, 90 points ahead of fellow Korean Park Sung-hyun. Players receive points for top-10 finishes, and points are doubled for major tournaments.