Institutions step into the decline

Institutions step into the decline 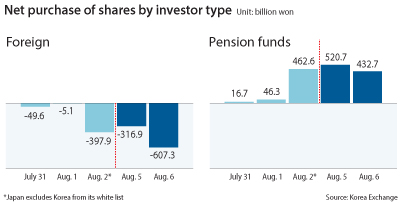 Near panic at the open gave way to calm later in the day as institutional investors came into the Korean market in a big way.

One minute after the 9 a.m. open, the benchmark Kospi was down 2.39 percent as foreign and retail investors dumped their shares wholesale.

They were not only responding to the trade war between Korea and Japan, but they were also reacting to the decision by the U.S. to name China as a currency manipulator.

The Kosdaq - where futures were suspended Monday for the first time in three years - moved in sympathy. It fell as much as 5.1 percent but closed down 3.21 percent to 551.50.

“The overnight drop in global stock markets was largely due to the intensifying trade dispute between the U.S. and China, which could spill over to a currency war,” said Kim Hwan, analyst at NH Investment & Securities.

Over five consecutive days, the index has lost 5.94 percent of its value, or 121.18 points. It is down a full 10 percent from July 1, when Japan first announced its trade restrictions targeting Korea.

The drop Tuesday was not nearly as bad as it might have been in part due to heavy buying from institutional investors, especially pension funds.

The pension funds net bought 429 billion won of Kospi stocks. From Friday through Monday, they purchased in total 1 trillion won of shares, stepping in as Japan removed Korea from its “white list” of countries qualified for simplified export procedures.

The last time the pension funds net purchased more than 500 billion won worth of Korean shares was eight years ago on June 4, 2012.

These intuitions have often played pivotal roles in times of crisis. During the 2008 global financial crisis, they net purchased a total of 9 trillion won worth of shares.

Financial institutional investors joined the pensions in buying local shares. They were net sellers on Friday but purchased 288.4 billion won of shares on Monday and 417.2 billion won on Tuesday.

“It will be difficult to expect foreign investors to make a distinctive [stock] purchase anytime soon as overall global securities transactions are shrinking and the won is depreciating against the U.S. dollar,” said Kim Kwang-hyun, Yuanta Securities analyst.

“It is the appropriate time for institutional investors to be increasing their purchases in the market.”

Foreign investors recently have turned negative as they have been offloading shares over the last five consecutive trading days, selling a net 1.38 trillion won worth of Korean shares.

Despite the institutional investor support, market experts say the current bearishness is likely to continue.

“We’re likely to see additional declines rather than local stocks rebounding as there is the possibility of the Japanese government adding new trade restrictions and the trade dispute between U.S. and China continuing,” said Kim Hyo-jin, SK Securities analyst.