Korea’s current account surplus fell to its lowest level in seven years as exports weakened, and it could fall further given the ongoing trade disputes.

According to the Bank of Korea on Tuesday, the figure in the first half was $21.8 billion, down 25 percent from the same period a year earlier. The last time the number fell to this level was in the first six months of 2012, when it totaled $9.65 billion. 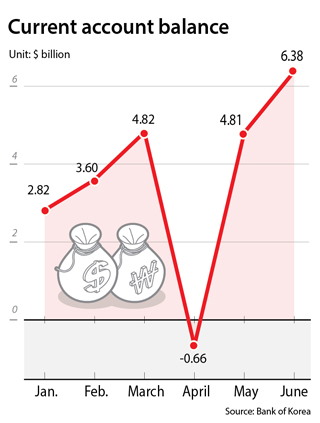 Exports have been falling for seven consecutive months. The total was $277.7 billion in the first half of the year, which is a 9 percent drop from the same period a year earlier and the weakest half since the last six months of 2016.

Imports fell 5.7 percent year-on-year to $240.6 billion largely due to falling imports of semiconductor-related machinery and the drop in crude oil prices.

With exports dropping faster than imports, the goods surplus in the first half was $37 billion, the smallest in six years and down 29.3 percent from the same period a year earlier. In the first half of 2013, it was $33.7 billion.

“While global trade has contracted, China, which is a major export market, struggled,” said Park Yang-su, head of the statistics department at the central bank. “Additionally, the unit price of semiconductors has fallen, contributing to the shrinking goods surplus.”

The current account surplus in June totaled $6.38 billion. This is the largest surplus in eight months. The Korean surplus has been shrinking since posting $9.35 billion in October. However, when compared to a year earlier, the surplus was down 14.5 percent.

Exports in June fell 15.9 percent to $44 billion, largely due to the trade dispute between the U.S. and China and falling DRAM prices.

The central bank said, however, that the overall number was helped by services. The service deficit in June totaled $2.09 billion. This is less than the $2.42 billion deficit posted a year earlier. In June the travel deficit was $1 billion, an improvement from the $1.2 billion a earlier.

With July and August being the vacation season, the travel account could be affected by the large number of Koreans going abroad. Poor relations with Japan could also affect the balance.