Toward a ‘beautiful country’

Toward a ‘beautiful country’

Although tensions are escalating between Korea and Japan after Tokyo declared an economic war, the Donald Trump administration has no intention to mediate, according to senior U.S. officials at the State Department. 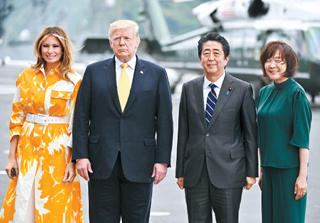 U.S. President Donald Trump and his wife, and Japanese Prime Minister Shinzo Abe and his wife, pose on the deck of the JS Kaga. [YONHAP]

The U.S. position reminds us of Trump’s state visit to Japan at the end of May. Trump landed on the JS Kaga, a helicopter carrier, becoming the first incumbent U.S. president to board a ship of the Japan Maritime Self-Defense Force. After taking a photo with Prime Minister Shinzo Abe, Trump emphasized that Japan is purchasing 105 F-35 fighter jets, worth 20 trillion won ($16.5 billion).

Since Trump’s election, the world is being swept by a trend of protectionism. The U.S. started a trade war with China and its Atlantic allies of Europe. After Washington levied heavy tariffs on European automobiles, the European Union slapped tariffs on U.S. jeans and oranges.

Trump used tariffs and trade as a means to demonstrate the power of the United States. Overwhelmed by that power, the European Union decided to increase imports of U.S. beef almost threefold. Abe seems to be following in the footsteps of Trump, who values national interests over history or legitimacy.

Protectionism is also changing the structure of the global economy. Deputy National Security Advisor Kim Hyun-chong said the world is facing a period of transformation from the multilateral system of global division of labor to protectionism. Even if the current discord with Japan is resolved, similar threats can be repeated, so the government and companies must put all efforts to build a sustainable technological ecosystem.

Abe’s dream is to make Japan a “beautiful country.” That means a strong Japan where a war is not outlawed, and he may feel happy demonstrating the nation’s powers, just like Trump. In his first press conference after taking office, Abe said he will build a country that is trusted and respected by the world. “We must not let our children, grandchildren, and even further generations to come, who have nothing to do with that war, be predestined to apologize,” Abe said in 2015 in his statement to mark the 70th anniversary of the end of war. It’s a different stance from German Chancellor Angela Merkel who said, “We have to remember the victims of national socialism so that history never repeats itself.”

Abe’s attacks will not lessen the burden of the future generation of Japan. Only when he embraces history, will he be able to see a way to build a beautiful nation.