Forget Robocop, Korea is getting Robovalets

Forget Robocop, Korea is getting Robovalets 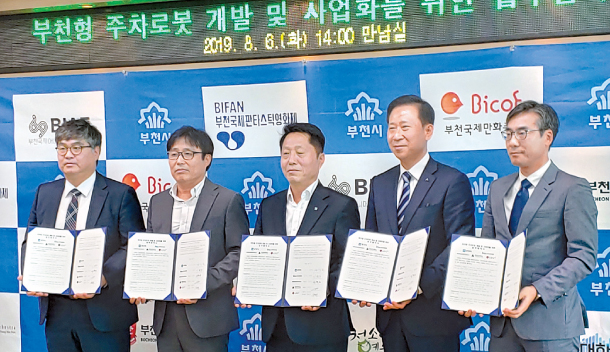 LG U+ and Hyundai Movex are partnering with Bucheon, Gyeonggi to develop a robot that parks your car.

The companies on Tuesday signed a memorandum of understanding with the city government, Bucheon Industry Promotion Foundation and local robot maker MaroRobot Tech to develop and commercialize the robot.

The robot is expected to look like Amazon’s autonomous guided vehicle Kiva, which is used to move goods around the retailer’s warehouse. Rather than actually driving vehicles around, the robot would just pick them up, move to a space and put them back down again.

“The exact shape of the robot has not been fixed yet, but we are thinking of a carrier-type vehicle that can go under cars, lift the cars up, and carry them over to a parking area,” a spokesperson for LG U+ said.

This way, drivers only need to leave their cars at the entrance to a parking lot, and the carrier will automatically place them in empty spaces.

“The time taken for parking will be greatly reduced because the robots will know which space is empty and they’ll have better parking skills than human drivers who struggle with parking,” the spokesperson added.

The robots will also need less space to park each car because they won’t need to leave space for doors to open. When drivers need the cars back, the robot will also deliver the vehicle to the driver.

MaroRobot Tech will design the robot, Hyundai Movex will develop the IT systems to train the robot and LG U+ will offer its 5G wireless network.

When fully developed, the robot will be able to download 3-D maps from a cloud server and drive autonomously around parking lots based on those maps.

The companies plan to complete development and commercialization by next year. Public institutions and industrial complexes in Bucheon will be the first to adopt it, LG U+ said.