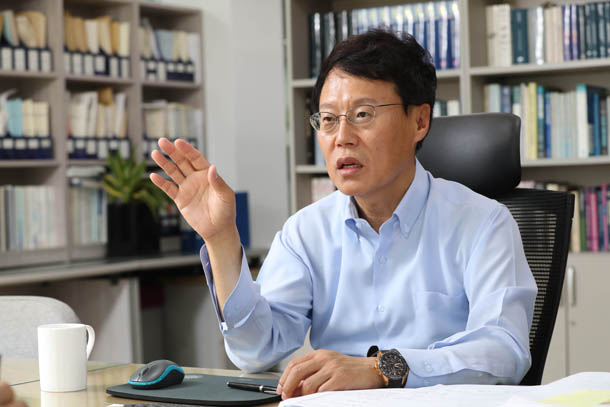 Japanese trade restrictions will no doubt create challenges for Korea and its largest companies, but in short order, it will be the Japanese who will be facing difficulty, argues an industry veteran and association leader.

“By February, the discontinued supply will hit Japanese companies like a boomerang, and they’ll eventually find themselves in a difficult situation,” said Park Jea-gun, president of the Korean Society of Semiconductor & Display Technology. “By the month’s end, tests to replace the three Japanese materials will be complete, and from there, we’ll start distancing from Japan, step by step.”

“Japan’s removal of Korea from its so-called white list has once again put the domestic chip industry at the risk of securing photomasks,” said Park. “But they still have stockpiles, and alternatives can be found in Singapore, so that won’t be a big problem.” Photomasks are glass plates through which light passes to print circuits on the wafer.

An engineering professor at Hanyang University, Park worked with Samsung and SK Hynix establishing chip production lines and is a semiconductor expert leading forums among local material and equipment makers. Below is an edited excerpt from his interview with the JoongAng Ilbo on Sunday.

Q. When will we see test results on alternatives for the three high-tech materials?

A. There may be a timing difference, but both companies are aiming to complete tests by the end of this month. Korea’s leadership in the global semiconductor market was the result of overcoming numerous risks over the past 30 years or so. Of course, halted material supply is a severe risk, but we’ve overcome greater obstacles. I feel the efforts by domestic companies to secure stock ahead of Japan’s restrictions and search for overseas supplies are bearing fruit.

We’ve imported low-purity hydrofluoric acid in the form of liquid from China and refined it in Korea. Etching gas, or fluoride hydrogen, was obtained in a similar way. DRAMs or NAND flash chips generally take between 60 to 90 days to manufacture. Domestic companies are currently undertaking tests to gradually expand the application of alternatives to different stages of manufacturing.

For example, if hydrofluoric acid was required in 10 procedures, stages from one to eight would make use of stockpiled Japanese material, and steps nine and 10 would be tested with newly-obtained alternatives. In this way, companies have been able to test alternatives to work on five to six procedures without causing problems.

(According to industry sources, Samsung and SK Hynix are building facilities for mass production of these materials.)

Are EUV photoresists to be sourced domestically?

That’s the difficult part. EUV photoresists are essential for Samsung’s foundry business in making seven nanometer chips and applied processors (AP). SK Hynix is in the process of developing products [using the technology]. At the moment, both companies are not using the material that much. My understanding is that they’ve both secured enough stockpile over past several months.

(According to industry sources, Samsung secured stock for six to 10 months of production and is rapidly signing with domestic partners.)

What about fluorine polyimide?

That’s not directly linked to semiconductors, but it is related to making the Galaxy Fold. At the moment its usage is not widespread, and it’s possible to find a local alternative.

Does that mean we no longer have to rely on Japan for those three materials?

Optimistically speaking, we won’t need Japanese materials by next February, when chip production lines will have run one or two full production cycles. Japanese suppliers lost the trust of the global market due to its government. From now on, Japanese companies will be excluded from the global supply chain and lose major clients. This will drive them into financial difficulties.

But fluoride hydrogen or EUV photoresists require a high level of technology, so it will take at least a year for domestic products to completely replace Japanese imports. It’s too early to be so confident.

We may have put out the immediate fire, but now we have to deal with Korea’s exclusion from the white list.

For chip makers, semiconductor equipment, photomasks and silicon wafers may be a problem. Photomasks are 100 percent imported from Japan. At the moment, domestic companies are considering plans to import them from Singapore or partnering with local companies or the U.S.-based Corning.

Shouldn’t we find a fundamental way to lower dependence on Japanese materials and parts?

Yes. Samsung and SK Hynix have always aimed for the “world’s first.” They imported the best parts and materials in the world to make the best-quality semiconductors found in the global market. But with the recent events, they saw how easily the global supply chain can break. The global trade market used to run on the principle of free trade. The advent of world leaders like U.S. President Donald Trump, China’s Xi Jinping and Japan’s Prime Minister Shinzo Abe gave rise to the proliferation of protectionism. Our companies now have to keep in mind when they devise their supply chain there needs to be diversification not only in terms of the number of companies, but also the number of countries.

The government pledged to speed up developing 100 key industrial materials.

It said it would support growth for local manufacturers of 100 key materials, but in reality, the domestic chip and display industries don’t use technology anywhere below the global top tier. I don’t understand which domestic companies they plan to elevate. Practically speaking, it’s impossible to source every part and material from inside the country. We have to start listing parts and materials that are absolutely necessary so that countries supplying these items can be diversified to at least two. We can then push efforts to make sure that one of those two could be Korean.

What role should conglomerates play?

To achieve their goal to develop the domestic parts industry, the government said it will support mid and small sized suppliers and seek cooperation from major companies. They’ve been saying this for the last 20 years, but we still have foreign dependence. There should be a permanent committee under the domestic parts and material law that incorporates not only small companies but also major ones. The government should offer support to smaller suppliers to help them develop technology, and major companies should help by purchasing the production. It’s not just about Samsung and SK Hynix.