LG Electronics will unveil a new high-end smartphone on Sept. 6, according to an invitation sent to media on Tuesday.

The new device will be showcased at the annual electronics show IFA 2019 in Berlin. 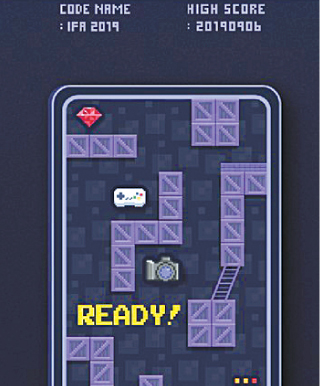 A screen capture of LG Electronics’ video invitation to the unpacking event for its next flagship smartphone. [LG ELECTRONICS]

A 20-second YouTube video attached to the invitation suggests that LG’s next device will use two screens, either via a folding screen or dual screens like the existing LG V50 ThinQ. The video shows an 8-bit video game character appearing to move from one screen to another, eventually arriving on a map marked “IFA 2019 Berlin.”

“At IFA 2019, LG Electronics will introduce a flagship smartphone, our main product for the year’s second half, as well as an upgraded LG dual screen for the first time,” the company said in the statement.

On Sept. 5, the company will hold a global media event to unveil the products a day before the exhibition starts.

LG’s V50 ThinQ was released with a second display as an optional accessory. The two can combine to be a “dual screen” phone that has two separate screens opening like a book. The dual screen accessory was originally priced at 219,000 won ($180), but is offered for free to customers who purchase the smartphone before the end of this month.

While the V50 ThinQ’s dual screen allows the two screens to run different apps, Monday’s video hints that the new version will allow the displays to work together with one app running across both screens. Like the V50, the dual screen will come in the form of an attachable accessory rather than an integrated feature.

LG’s dual screen phone concept was not met with positive reviews when it was revealed at the annual phone exhibition MWC 2019 earlier this year when it competed with Samsung Electronics and Huawei’s foldable phones. However, as Forbes put it, it turned out to be the most “realistic foldable option” as both competitors have been forced to postpone their release dates to September.