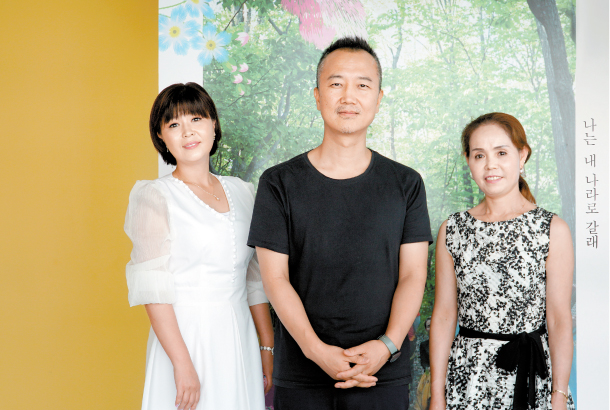 From left, North Korean defector Kim Bok-ju, director Im Heung-soon and defector Han Young-ran pose for a photo after an interview. The documentary “Ryeohaeng” is slated to premiere on Thursday. At left, a pamphlet in the shape of a passport symbolizing a defector’s journey to South Korea. [JEON TAE-GYU]

“Ryeohaeng,” the North Korean word for “travel” and also the title of director Im Heung-soon’s film, tells the stories of 10 female North Korean defectors and their struggles to adapt to society in South Korea.

Director Im won the Silver Lion Award at the 56th Venice Bienale for his 2014 film “Factory Complex” (2014), which tells the tales of working class women. For his latest film, he shifted his attention to North Korean defectors, particularly women, and had them act out their experiences on screen. 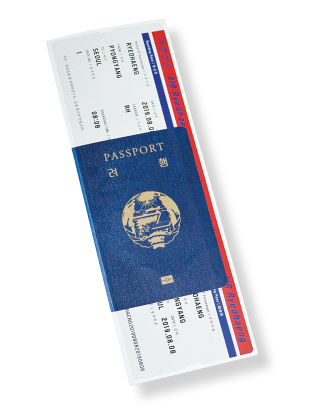 “I wanted to show the raw reality that people forget about or neglect. People might feel uncomfortable, but I think it’s a need-to-know part of our society,” said Im during an interview with the press after the press screening at Daehan Cinema in central Seoul. “If commercial films about North Korea are meant to be entertaining, I believe films like mine shape people’s perspectives [and help them] face the truth. Sometimes it might be painful, but I think it’s really important that people also feel that emotion.”

The Korea JoongAng Daily had the chance to interview two of the women who appear in the film, as well as the director, in order to learn more about each of their individual stories and the director’s intentions behind the scenes.

Kim Bok-ju, 41, is currently a singer and an actor who defected from North Korea in 2007. Han Young-ran, 52, was the victim of human trafficking and was sold to a broker in China in 1999. She intended to stay in China for only a month to earn some money because she had a young son to take care of. While she was desperately searching for news about her son in China, she learned that he had died. A month turned to 10 years in China before she defected to South Korea in 2009.

The following are edited excerpts from the intervirew.

Q. In the film, you talk about how you were sold to a broker without even knowing it. Is this common for North Korean women?

A. Han: It is. It brings me to tears to talk about the experience back then, not for myself, but for other young girls who were sold to brokers. They couldn’t have been more than 20, and while I was married, had a kid, and was planning to go back home, these girls escaped the country and were relying on the brokers for everything. So these brokers - men in their forties and fifties - threatened the girls and would rape them. So they obliged, and it really broke my heart.

Kim: Women almost never talk about these experiences because they feel embarrassed. So they hide it. But they have so many mental health issues and trauma, which makes it even harder to adjust [to life in South Korea].

All the North Korean defectors I know are sick in some way or another. No one is physically and mentally healthy. But they hide it. And we don’t even have our families to protect us, or just be there for us. Many of us don’t even know whether or not they’re alive… And that’s the kind of pain and emptiness that you couldn’t understand unless it actually happens to you.

What is the hardest part of living in South Korea?

Han: When I first came to the South, my daily routine consisted of going to the hospital to receive treatment until three in the afternoon. Then I would trudge back home and that would be the end of my day. I barricaded myself from the rest of the society. After living like that for several years, I realized that I couldn’t continue to live so segregated, so I came out of my shell, little by little, receiving help from other defectors and communities.

Back then, I thought people were biased against me [because I am a defector] so I just stayed inside my shell, shying away from everyone who approached me. Breaking free from that perception was the hardest part, I think. But now I can tell anyone with confidence that I’m from the North.

Kim: I’ve realized that mental illness affects my life more than I’d like to admit, but I honestly don’t know if I’ll be able to fully recover from it. And I think the same goes for the majority of others as well.

Even more, I still think people tend to ignore or mistreat female defectors. So that hurts us and that makes it harder for us to adjust here. Only one or two out of 10 people truly seem to care about us. My younger sister also came to South Korea and got a job as a government worker. But her boyfriend - the person who should be encouraging her the most - scoffed at her saying, “How could you pass the exam?”

Images of nature, like Mount Samseong in Anyang, are highlighted in the film. While interviewees told their stories of escaping the North, I thought the way nature was portrayed was dark and even depressing, as if to reflect the feelings of helplessness and despair that the defectors felt. Was that your intention?

Im: I think nature feels different for North Koreans and South Koreans. For [South Koreans], nature is a peaceful place where one might feel free, but for the defectors it represents survival. They crossed mountains and rivers to escape the North, and they’ve risked their life for it.

Han: There is no such thing as freedom while defecting. I don’t think I would be able to ever forget the terrible memories of crossing the rivers and mountains, although it’s been almost 20 years since I left the North. I still have nightmares of being pursued while I cross the Tumen River. Nature cannot be separated [from our memories of leaving the North].

Why did you have the interviewees act out their experiences?

Im: It might be a little cliche, but I wanted to find a middle ground between providing entertainment and providing information. I didn’t want my work to be too serious to the extent that the audience will be weary watching the film, so I thought it would be fun to have the interviewees be actors.