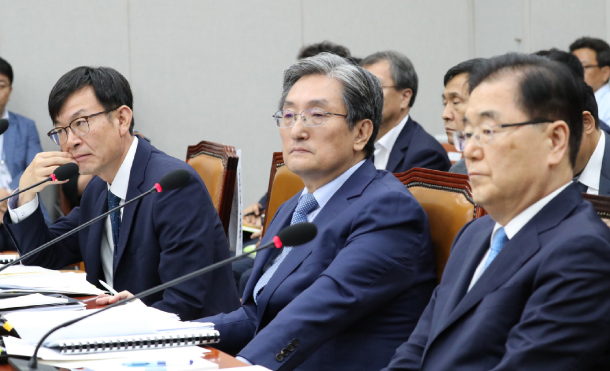 Seoul’s compensation plan for victims of Japan’s wartime forced labor, which was rejected by Tokyo in June, was based on an agreement with the victims themselves, a top Blue House official said Tuesday.

Presidential Chief of Staff Noh Young-min attended a hearing of the National Assembly’s House Steering Committee on Tuesday and answered various questions from lawmakers. When a lawmaker from the opposition Liberty Korea Party criticized the Moon Jae-in administration’s lack of preparation, Noh discussed in detail how the government came up with the compensation plan.

The Foreign Ministry said it proposed to Tokyo on June 19 that Korean and Japanese companies raise funds and jointly compensate the victims of forced labor during the Japanese colonial period. The plan was to follow through with the Korean Supreme Court’s ruling in October last year that individual victims have the right to seek compensations from their employers, but this proposal was immediately rejected by Japan.

Noh told lawmakers on Tuesday that the government had exerted most of its efforts to reach an understanding with the victims on the proposal. “Some said there was no agreement with the victims before making a proposal to Japan, but that is not true,” he said. “We judged that we had reached a consensus with the victims.”

It marked the first time a senior official has formally admitted that the government had consulted with the victims about the compensation measures. “For any proposal to be realistic, we judged that it must be accompanied by the victims’ acceptance,” Noh said, adding that the comfort women victims deal, reached between the previous Park Geun-hye administration and Shinzo Abe administration in 2015, had failed to do so. Citing its lack of procedural legitimacy, the Moon administration scrapped the deal, subsequently prompting Japan’s furor.

“After the Supreme Court’s ruling last year, we concentrated our best efforts for six to eight months to persuade the victims,” Noh said. “[Based on the consultations], we produced the best possible proposal.”

“Some victims and companies in Korea and Japan said they were not previously informed, but I want to say that what’s revealed on the surface is not always the truth,” Noh said. “To realize this plan, we did exert all our diplomatic efforts. We informed Japan that this was our proposal, but we were not insisting on it. We said we also wanted to put Japan’s proposal on the table and have a candid discussion.”

Noh also made a lukewarm admission that a media report that Prime Minister Lee Nak-yon collected opinions of about 30 leaders, including former Foreign Minister Gong Ro-myung, and drafted a more conservative compensation plan but the Blue House rebuffed it in November last year, was true.

“After the Supreme Court’s ruling, various ideas were proposed,” Noh said. “Gong, Lee and many others made proposals.”

In an interview with the JoongAng Sunday last week, Gong said the leaders proposed that a fund be created by the Korean government and Korean companies that benefited from the 1965 normalization treaty with Japan. Japanese companies, if they volunteered, would also participate in the fund, the proposal said.

“Prime Minister Lee reported the plan to the Blue House, but got rejected,” Gong said. Contrary to what Noh said, Gong claims the government, without any diplomatic preparations, then proposed to Japan in June that companies of the two countries create a compensation fund, triggering Tokyo’s rejection.

The victims also maintain the government failed to reflect their opinions. “I wonder whom of the victims the government had contacted,” Choi Bong-tae, an attorney of Samil Law P.C., who has represented the forced labor victims of Japan’s Mitsubishi Heavy Industries since 2000, told the JoongAng Ilbo on Tuesday. “I want to know if the victims did agree with the government’s proposal.”

“The Japanese government is responsible for the offense, but the Foreign Ministry’s plan failed to reflect the roles of the two countries’ governments in the compensation process,” Choi said. “The Korean government must consult with the Japanese government, but it did nothing for eight months since the Supreme Court’s ruling, and that upset Japan, and the situation escalated to this.”