Pyongyang’s 4th round of rockets in two weeks

Pyongyang’s 4th round of rockets in two weeks 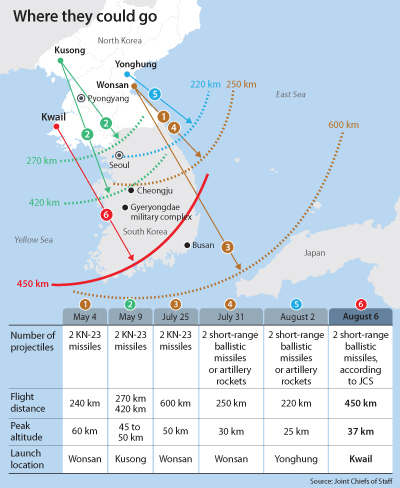 North Korea conducted its fourth weapons test in two weeks early Tuesday morning with a pair of unidentified projectiles launched into the East Sea, justifying the act as an “essential and powerful physical means” in a statement from its foreign ministry.

The projectiles, which South Korea’s Joint Chiefs of Staff (JCS) said appeared to be short-range ballistic missiles, were fired at 5:24 a.m. and 5:36 a.m. from an area around Kwail County in South Hwanghae Province. They each flew a distance of around 450 kilometers (280 miles) with peak altitudes of 37 kilometers at Mach 6.9, according to a JCS spokesman.

South Korean and U.S. intelligence officials believe the rockets displayed a flight pattern similar to the short-range ballistic missiles launched on July 25, the first in a series of four tests that all involved projectiles launched into the East Sea. The North’s state media followed up each of the previous three tests - on July 25, July 31 and last Friday - with reports saying the country had tested new types of ballistic missiles and rocket artillery, all under the personal direction of its leader, Kim Jong-un.

Tuesday’s tests were accompanied by a statement from a Foreign Ministry spokesman blaming the recent string of launches on South Korea and the U.S.’ joint military drills and the deployment of new weapons to the South.

“Despite our repeated warnings, the United States and South Korean authorities have finally started the joint military exercise targeting the DPRK,” read the English-language release, using the acronym for North Korea’s official name, the Democratic People’s Republic of Korea. “This is an undisguised denial and a flagrant violation of June 12 DPRK-U.S. Joint Statement, Panmunjom Declaration and September Pyongyang Joint Declaration, all of which are agreements to establish new DPRK-U.S. relations and build a lasting and stable peace regime on the Korean Peninsula.”

Saying the North had no reason to keep its promises while the United States and South Korea ignored theirs, the statement stressed the regime was “compelled to develop, test and deploy the powerful physical means essential for national defense.”

Seoul and Washington’s joint military drills kicked off Monday with a computerized command post exercise and are expected to continue for around three weeks. For South Korea, they represent an important step in testing its initial operational capacity (IOC) for an envisioned transfer of wartime operation control from the United States. North Korea has argued the drills are a rehearsal for a military invasion of its territory.

The Foreign Ministry statement warned that if the allies do not relent on their dual posture of seeking dialogue while “sharpen[ing] a sword to do us harm,” Pyongyang would be forced to seek a “new road” as it warned earlier, one in which the allies would pay a “heavy price” for ignoring its threats.

It is not yet clear what this so-called “new road” would be, but the language is familiar from the period after the collapse of Kim’s second summit with U.S. President Donald Trump in Hanoi, Vietnam, last February.

After its offer to give up certain nuclear facilities was rebuffed at the summit by Trump, who demanded full denuclearization, Pyongyang publicly said it would only return to negotiations once Washington presented “a new calculus.”

Dialogue between the two countries has yet to resume, and the joint drills are the latest obstacle to engagement, in spite of Kim’s and Trump’s agreement to resume talks at their sudden meeting at Panmunjom last June.

The fragility of the process was also evident by the stance taken by the Trump administration to the North’s recent weapons tests, with the president, U.S. Secretary of State Mike Pompeo, and even hardline National Security Adviser John Bolton refraining from condemning Pyongyang in the hopes of keeping talks alive.

U.S. Defense Secretary Mark Esper said Tuesday that the United States will not “overreact” to the North’s missiles, while keeping “the door open for diplomacy.”

Seoul’s military says the tests all involved short-range ballistic missiles that could be the North’s domestically produced variants of Russian-made Iskander missiles.

Given the 450 kilometer range of the recent tests, which took place at a more inland location in South Hwanghae Province, the projectiles from Tuesday appear more like ballistic missiles than the “large-caliber multiple launch guided rocket system” that Pyongyang said it tested July 31 and last Friday.