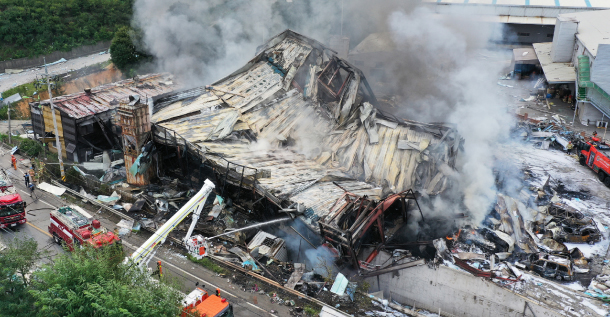 Firefighters extinguishing a fire at a factory that manufactures paper boxes in Anseong, Gyeonggi, on Tuesday afternoon after an explosion in the basement of the building. One firefighter was killed and 10 others were injured, including factory workers and at least one passerby. [YONHAP]

An explosion at a factory in Anseong, Gyeonggi, killed one firefighter and injured 10 people on Tuesday.

The explosion took place at a factory that manufactures paper boxes at around 1:14 p.m.

Firefighters from Anseong Fire Department were dispatched almost immediately following a report from the factory’s automatic fire report system, and arrived at the scene around 1:20 p.m., according to authorities.

One of these firefighters, a 45-year-old man named Seok Won-ho, died while fighting the fire. He had been a firefighter for 15 years and had received commendations from the Gyeonggi governor and Songtan Fire Department in Pyeongtaek, Gyeonggi, in 2008 for his firefighting achievements.

Another firefighter, a 58-year-old surnamed Lee, sustained injuries to his face and both arms while fighting the fire, authorities said.

Nine more people were reported to be injured, including at least one passerby who was driving past the factory when the explosion happened. They have been hospitalized.

A total of 50 fire trucks and 130 fire fighters were dispatched to the scene.

Authorities suspect the explosion started on the lowest floor of the factory and said they will be investigating the cause of the incident once the fire’s been put out.

“We suspect the fire began in the basement level of the factory,” said Chung Gui-yong, head of the Anseong Fire Department.

The basement level was reported to have been used by another company as a warehouse to keep cleaning agents for semiconductor products.

“I heard a booming sound like someone fired a cannon,” said a woman in her 70s who lives in an area less than two miles from the factory.