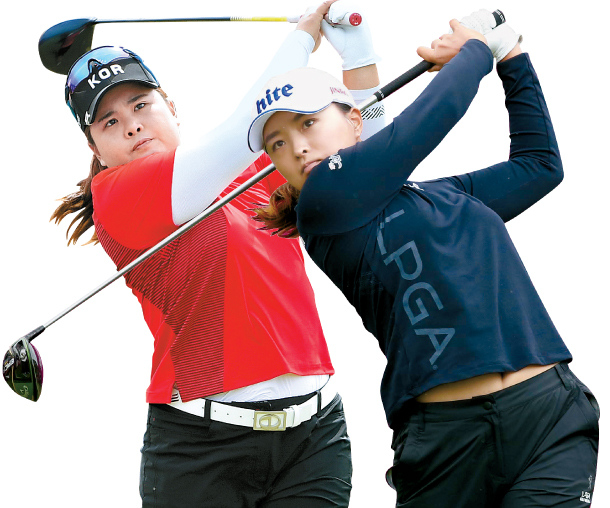 From left: Park In-bee and Ko Jin-young returned to Korea and will compete at the Jeju Samdasoo Masters starting Friday. [JOONGANG PHOTO]

After a long break, the KLPGA Tour will resume its season at the Jeju Samdasoo Masters at Ora Country Club tomorrow. This weekend offers a special treat for fans as two of the LPGA Tour’s top players - Ko Jin-young and Park In-bee - will return home to try their hand in the domestic tournament.

This is the sixth year of the Jeju Samdasoo Masters, which marks the start of the second half of the 2019 KLPGA Tour season. This year, the total prize money for the tournament has increased to 800 million won ($660,000), of which the winner will take home 160 million won.

But the biggest attraction this year is the return of world No. 1 Ko Jin-young and Korean golfing legend and 19-time LPGA Tour event winner Park In-bee. Both players are regulars at the Jeju event, with Park competing every year since the inaugural event and Ko winning in 2017.

Looking at Ko’s recent performance, it looks like she is flying through this season. That’s not entirely true - following her victory at the ANA Inspiration in April, Ko struggled to record any top-10 finishes for a while. Due to this, last month, she headed to Chicago for two weeks to fix her swing before going on to win the Evian Championship.

“I had a hamburger at 6 in the morning and just kept on hitting balls until 5 to 6 p.m.,” Ko said. “I was hitting so many balls that I can’t even count them. I couldn’t even grip the club and I felt sick just by looking at golf balls. At the Evian Championship, I wasn’t playing as well as I expected but it got better as the tournament went on. I’m thankful that I went through that experience.”

Ko’s two weeks of training may have helped her significantly as she’s shown improvements with her shots and putts. It also showed in terms of her world ranking, as she reclaimed the top spot on July 30.

This season, Ko has won three tournaments on the LPGA Tour, two of which have been majors.

Ko will start her first round at 12:10 p.m., playing alongside Choi Hye-jin and Cho Jeong-min.

Along with Ko, former world No. 1 Park also hopes to pick up a win this weekend. Although Park has won 19 tournaments throughout her career on the LPGA Tour, she hasn’t picked up a single win for the past year and a half.

However, she’s still been consistent by recording multiple top-10 finishes, good enough to be ranked No. 5 in the world ranking.

“Since winning gold at the Rio Olympics, I consider my life as a professional golfer as a plus,” Park said. “So I’m trying to play without any pressure. Even if I’m playing golf as a plus, I don’t want to play bad golf. More than winning, it’s important to consistently stay at the top. I’m sure all the players want to play well in each tournament.”

Over the past three seasons, Park has played in fewer tournaments due to injuries. As a result, at the beginning of this season, she said her goal was to play in 20 tournaments. In 2016, Park competed in 10 tournaments while in 2017 she played in 15 and in 2018 she appeared in 13.

Already, she’s played in more tournaments than last year, as this will be her 15th tournament of the season. Park’s been hitting well but she hasn’t found her stride in putting, which used to be her strength.

“As I play in more tournaments, I’m slowly finding my sense for putting,” Park said. “It’ll get better.”

Although Park has been playing in the Jeju Samdasoo Masters since the inaugural edition, she hasn’t had much luck in terms of winning, as finishing fourth in 2014 was her best result.

Park will play her first round with defending champion Oh Ji-hyun and Kim A-lim at 8:30 a.m., starting on the 10th hole.

Aside from the tournament, the two golfers also have interesting backgrounds in Jeju. Ko is especially fond of the island as her grandfather, who named her, is from there, while Park won two tournaments as a junior at Ora Country Club, where the tournament is held.

Also, both Park and Ko compete wearing the Jeju Samdasoo logo, as Park signed an advertising deal in 2012 and Ko signed in 2014.

Aside from the two, some of the KLPGA players are also worth watching. Choi, who is playing her first round with Ko, is having quite a season as she has already picked up four wins and is leading the scoring average and prize money on the KLPGA Tour.

She also got to compete at the Evian Championship and the AIG Women’s British Open.

In addition to Choi, Cho, Lee Da-yeon and rookie Cho A-yean will be looking for a win. Defending champion Oh will also return to the course this weekend.

Although the tournament is held in the hottest month of the year, Jeju’s strong winds are expected to be the biggest determinant throughout the event.

“If it’s not windy, this course isn’t that difficult,” Park said. “Wind is always the variable.”