The Los Angeles Dodgers’ Korean starting pitcher Ryu Hyun-jin will return from the injured list (IL) on the weekend, as he’s set to resume a march toward his first Cy Young Award. 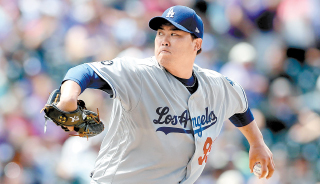 Ryu Hyun-jin of the Los Angeles Dodgers throws a pitch during a game against the Colorado Rockies on July 31. [GETTY IMAGES/YONHAP]

Dodgers manager Dave Roberts told reporters Tuesday that Ryu will start against the Arizona Diamondbacks at Chase Field in Phoenix on Sunday. The first pitch is 1:10 p.m. local time Sunday, or 5:10 a.m. Monday in Korea.

Ryu has been excellent against the Diamondbacks this year, having gone 2-0 while holding them to one earned run on seven hits in 13 innings, with 10 strikeouts against no free passes.

Ryu landed on the 10-day IL last Friday, retroactive to Thursday, with neck soreness. Ryu didn’t appear to be injured following his latest start against the Colorado Rockies last Wednesday, when he tossed six shutout innings at Coors Field in Denver. But he woke up the next morning with a sore neck, though both Ryu and Roberts insisted the injury wasn’t serious.

Ryu’s starts this season have been appointment viewing in Korea, if they weren’t already so, as the 32-year-old left-hander has emerged as a leading contender for the National League (NL) Cy Young Award.

Greg Maddux owns the record for fewest walks allowed by a Cy Young-winning starter, with 23 in 209 2/3 innings over 28 starts in the strike-shortened 1995 season.

Another NL Cy Young contender, three-time winner Max Scherzer of the Washington Nationals, is currently on the IL with a mild rhomboid strain. Scherzer leads the NL in strikeouts with 189.

Ryu leads the way in more traditional categories, such as ERA, WHIP and winning percentage (.846). Scherzer is 9-5 with a 2.41 ERA, but is ahead of Ryu in advanced stats, with 5.3 Wins Above Replacement (WAR) on Baseball-Reference’s scale, and 2.09 in fielding independent pitching (FIP), which focuses only on events that a pitcher can control, such as strikeouts, unintentional walks, hit-by-pitches and home runs.