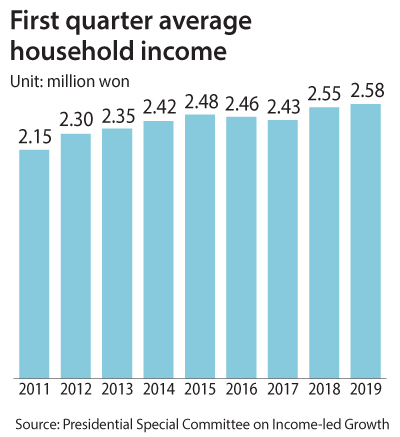 It claims that the poorest people in the country are actually earning more as a result of the program, which drove up wages to improve lives and boost the economy.

According to a committee study released on Wednesday, in the first quarter of this year, income earned from labor by those in the lowest 20 percent income bracket rose 7.7 percent compared to the same period a year earlier, to 107,000 won ($88) a month.

The claim contradicts other authoritative findings. Statistics Korea reported in May that the labor income of the lowest income quintile fell 14.5 percent during the same period. The statistics agency’s study was based on households that have two or more family members.

When including other income, such as financial investment returns, and when accounting for single-person households, monthly income of those in the target cohort rose 0.8 percent from 652,000 won to 658,000 won. But when excluding single households, income shrunk 2.5 percent.

“Single households today account for 20 percent of all households in Korea,” said an official with the income-led growth presidential committee. “And most of these people living alone are in the bottom 20 percent.”

The committee said the single households should be included in the income statistics to achieve a more accurate picture.

“The income increase was largely the result of government policies aimed at increasing employment for senior citizens,” said the presidential committee official.

Households with labor income in the bottom 20 percent have increased from 23.8 percent of the total in the first three months of 2018 to 27.6 percent in the same period this year.

Overall household labor income has grown, according to the committee, from 2.55 million won a year ago to 2.58 million won as more people are employed.

In the first quarter, households with labor income were for 67.4 percent of the total, up from 66.8 percent a year ago.

The report comes as attacks on the administration’s income-led growth policy have been on the rise. It has been characterized as failed policy, as the higher minimum wage has led to job losses in certain key age groups.