From creating a digital copy of a city to virtually testing the flow of fine dust to directing drivers to empty parking spaces through connected infrastructure, Korea is pushing to develop smart cities that attempt to tackle society’s most pertinent problems.

Under the current administration’s drive to revamp infrastructure to incorporate the latest technology, companies, researchers and government representatives gathered to showcase their visions of a smarter urban environment on Wednesday at the Smart Geo Expo held in Coex, southern Seoul.

Featuring technology like sensor-equipped drones and a system that creates a “digital twin” of an entire neighborhood, the three-day exhibition by the Ministry of Land, Infrastructure and Transport hosts 85 companies and organizations from 24 countries.

While Korea’s recent focus on smart cities has relied on the potential of the super-fast 5G network to boost sensor technology in urban infrastructure, the exhibition focuses on the country’s plans to revamp infrastructure through cutting-edge geographic information systems (GIS). 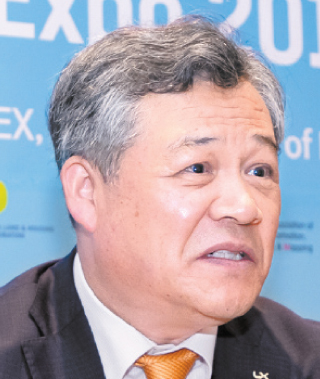 Leading global GIS company Esri took the stage to present its solutions already being implemented in other parts of the world. The U.S.-based company has created a “digital twin” of Boston to help evaluate the impact of new development projects through virtual simulations.

A spokesperson for Esri explained that the company is already working with regional governments in Korea to apply the technology on existing infrastructure such as water supply systems.

Japan-based Sokkia, which specializes in geospatial technology, featured a surveyor drone that reduces the time spent in surveying by 6.5 times compared to traditional methods by eliminating the use of surveyor target points.

The government is also ramping up support for the industry.

Park Sun-ho, vice minister of land and infrastructure, explained at the exhibition that the government will create a three-dimensional map spanning 5,500 kilometers (3,418 miles) of roads by the end of this year and launch a satellite for geographic analysis next year.

LX, a state-backed land information company, has been at the forefront of Korea’s drive to create a smarter urban environment by betting on “digital twins.”

The company featured its “digital twin” platform at the exhibition that aims to make copies of entire cities down to details as small as trees shedding leaves during seasonal changes.

It has recently created a digitalized copy of a neighborhood in Jeonju, North Jeolla.

“Digital twins are an incredible mechanism to manage cities,” LX President Choi Chang-hak told the Korea JoongAng Daily on the sidelines of the exhibition on Wednesday.

“By conducting simulations on digitalized copies of cities, authorities will be able to prevent potential problems,” said Choi. “Furthermore, they can provide a platform for real-time management.”

The veteran in geospatial analysis explained that officials can run simulations to test out public health hazards such as planting trees in the digital replica and checking the flow of fine dust based on that change.

“This platform is incomparable to existing map technology such as Google Maps,” said Choi. “We virtually have an identical copy of the city.”

LX has been active in the smart city project as it aims to set the standards in Korea’s efforts to make “digital twins” of cities. While the technology is in the early stages of development in Korea, LX hopes to develop the platform to place Korea as a leader in the technology.

Choi conceded that there is a long way to go in developing the platform, describing the difficulties in replicating the neighborhood in Jeonju earlier this year.

“There were a lot of problems we encountered with accurately replicating the Jeonju neighborhood,” said Choi. “It’s not simply taking a picture, but numerous sensors are required to accurately capture the neighborhood multiple times.”

“It’s almost like a blind man touching an elephant,” explained Choi, emphasizing the early stages of the technology.

“There are also differences by season,” added the president, highlighting that digital copies need to be constantly updated and that challenges remain in achieving that at minimal cost.

Choi ultimately hopes to engage the public to gather more data in a bid to create the most accurate model.

“We have to be more organized, and we hope to encourage participatory mapping,” explained Choi, in which individuals voluntarily submit information to update the digital copy model.

Choi urged the government to take a more active role to provide the regulatory and legal framework for the development of the platform.

“The smart city model is essentially the fourth industrial revolution,” said Choi, explaining that it will require all the cutting-edge technology from artificial intelligence to sensor equipment. “We currently only have a basic concept - we need laws and policies.”

“Smart cities are a process, there is no specific end goal,” said Choi. “We simply hope to create a model that leads to a safer and happier environment.”