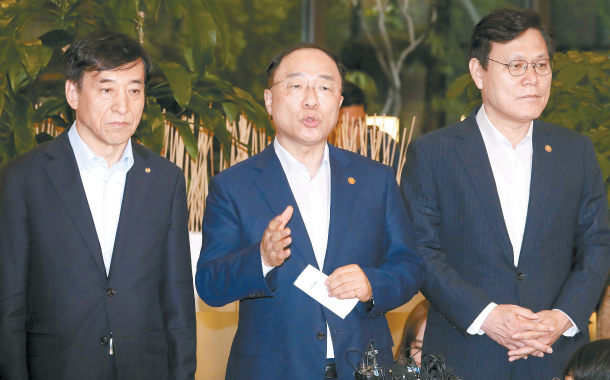 Bank of Korea Gov. Lee Ju-yeol hinted at the possibility of another rate cut on Wednesday in order to keep the economy from stalling as Japan imposes trade restrictions.

“If necessary, based on the situation, we will consider utilizing monetary policy,” Lee said. “However, as we are continuing to monitor the situation, it is not appropriate to be talking about an additional cut at this point.”

The central bank cut rates for the first time since June 2016 last month.

Gov. Lee was meeting with Finance Minister Hong Nam-ki in an emergency macroeconomic meeting as share prices dropped on the intensifying conflict between Korea and Japan and the trade war between the U.S. and China.

Since Japan on Friday officially excluded Korea from its white list of countries receiving preferential treatment for export procedures, the Kospi fell 5.3 percent. It fell below 1,900 during the day on Tuesday for the first time in three years.

“There is a possibility that the market will experience instability for some time depending on the development of external conditions,” Lee said during the meeting.

The market on Wednesday was stabilized by retail investor purchases, while foreign investor selling slowed after they dumped stock over the past five days.

“The government will boldly and swiftly use all tools that are available,” Hong said, citing recent discussions about the easing of buyback rules and possible limits on short selling.

The central bank last month cut rates for the first time in three years on concerns about a weakening economy. The monetary policy decision was made three weeks after Japan announced its first retaliatory actions against Korea by restricting the export of key materials needed in the manufacturing of semiconductor chips and displays.

The situation could deteriorate if the Japanese government takes additional measures.

The Korea Development Institute (KDI), a state-owned think tank, in a report said market experts have lowered the country’s economic growth forecast from 2.2 percent to 2 percent. The survey conducted last month involves the polling of 18 market experts. The same study was conducted in April.

The growth forecast is not only lower than the central bank’s 2.2 percent outlook, which was adjusted last month from 2.5 percent, but also far lower than the 2.4 to 2.5 percent growth projection by the Finance Ministry.

The KDI said growth is being slowed by falling exports.

The market experts polled projected exports to fall 6.8 percent in 2019, faster than the 2.9 percent projected three months earlier. As a result, Korea’s current account surplus is expected to shrink to around $50 billion, down from last year’s $76.4 billion.

“Many are expecting another cut to interest rates in the fourth quarter,” the KDI report said.

Even the 2 percent growth projection could be threatened.

KDI in its report stated that risks have increased due to trade tensions between U.S. and China and Japan’s export restrictions, amid slowing global economic growth.