The government should do its job

The government should do its job 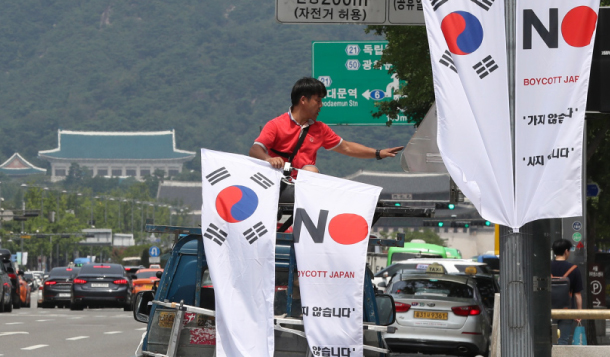 A worker from the Jung District Office hoists “No Japan” flags in downtown Seoul Tuesday as part of the district’s campaign to boycott Japan. Hundreds of those flags were removed just a few hours later after citizens raised objections to the municipal government-led boycott campaign. [NEWS1]

LEE ESTHER
The author is the welfare administration team reporter of the JoongAng Ilbo.

Hundreds of “No Japan” flags were hung in downtown Seoul, but removed just a few hours later. It started with Jung District Mayor Seo Yang-ho’s idea. “Jung District is the center of Seoul visited by many foreign tourists, and the flags can show the unjust actions of Japan and Korea’s strong will to the world,” he said.

He must have thought that he would receive applause, but public opinion was just the opposite. Petitions denouncing Seo poured into the district’s web site. The Blue House petition board also had a posting calling to remove the flags, which 17,000 people signed. The petitioner said that the flags suggest the government was encouraging a boycott campaign that citizens have been voluntarily promoting, and it could negatively affect the Korean government’s efforts to persuade international opinions. When faced with criticism, Seo wrote on Facebook, “It is not the time to distinguish official and volunteer armies. Why can’t a district office come forward? Why not in Myeong-dong, Jung District? There’s always the right timing.” However, when criticism intensified, he apologized and removed the flags.

Koreans are furious at the shameless actions of Japan not acknowledging past wrongdoings, but do not hate Japan. Late Kim Bok-dong, a Japanese military sex slavery victim, proposed raising funds for the victims of the 2011 earthquake in Japan and became the first donor.

The boycott that has been ongoing for over a month did not start by someone’s instigation. People are making personal protests against Japan for threatening Korea by using economic dominance as a weapon. That is a composed and strategic civil movement. Seo must have wanted to hold up a pennant in front of the people. But he was wrong this time. The government should do its job.