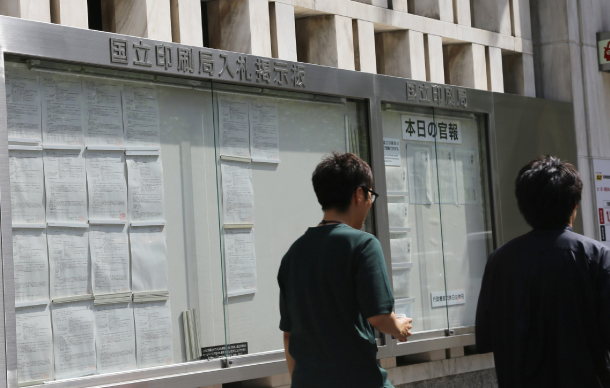 The Aug. 7 edition of the Japanese government’s official gazette, which published the order to remove Korea from the so-called white list, on display on the bulletin of Japan’s National Printing Bureau in Tokyo on Wednesday. [YONHAP]

Despite stern warnings from Seoul, Tokyo on Wednesday promulgated an order to remove Korea from its so-called white list of trusted trade partners, which will take effect on Aug. 28.

Japan, however, did not include additional items for stricter export regulations besides the three high-tech materials crucial for Korea’s semiconductor and display productions, listed last month.

After hosting the G-20 summit, Japan on July 1 unilaterally announced it will restrict exports to Korea of three key materials needed to manufacture semiconductors and displays - photoresists, fluorinated polyimide and hydrogen fluoride - and implemented the measure on July 4. It also forecasted that more restrictions were coming.

The export restrictions are seen to be in retaliation to Korea’s Supreme Court decisions last year ruling that Japanese companies need to individually compensate victims of forced labor during World War II.

As its next retaliatory step, the Japanese cabinet last Friday decided to remove Korea from its white list of 27 countries with minimum trade restrictions through a revision of its Export Trade Control Order. Korea has been on Japan’s white list since 2004 and has received preferential treatment when purchasing dual-purpose items which can be diverted for military use.

It takes 21 days for the measure to be enforced after its promulgation.

As if to assuage the white list removal backlash, Japan introduced a new policy which convolutedly categorizes its countries into four groups. Group “A” is its top trusted trading partners for security exports. Korea will be included in the second “B” grouping, described by the Japanese Trade Ministry as countries “participating in international export control regimes and satisfying certain conditions,” and will far more complicated export application procedures than before.

Seoul is rejecting Tokyo’s ambiguous excuses for the restrictions.

Tokyo has not officially recognized that its measures are in retaliation to the forced labor issue and has cited damaged “trust” and national security concerns, suggesting lax controls by Korea without providing substantive proof.

However, Japanese Prime Minister Shinzo Abe speaking at a news conference in Hiroshima marking the anniversary of the 1945 atomic bombing by the United States on Tuesday said Korea has “unilaterally” breached the 1965 bilateral claims agreement. Abe again said that the biggest issue between the two countries is a lack of “trust” and questioned whether “promises” between the two countries are being kept.

Japan maintains that a 1965 accord normalizing relations with Seoul, which provided an economic cooperation fund, settled all compensation matters. But the Korean Supreme Court found that the Japanese government failed to acknowledge the illegality of its 1910-45 colonial rule and that the forced labor victims’ rights to individual compensation have not expired.

“This just proves that the unfair economic measures being taken by Japan are not an issue of export controls but economic retaliation stemming from history issues,” Cho said in the statement. “The Abe administration should not turn away from the truth and needs to leave behind its selfish demeanor that disavows history, ignores human rights and undermines the free trade order.”

The Korean government says it cannot intervene in civil lawsuits as it respects the separation of powers and the independence of the judicial branch.

Last week, a senior Japanese Foreign Ministry official called President Moon Jae-in “out of line” for his remarks regarding Japan. Cho’s response Tuesday can be seen as a tit-for-tat move.

Korea has informed Japan it strictly abides by the four international export controls regimes - the Wassenaar Arrangement, the Nuclear Suppliers Group, the Australia Group and the Missile Technology Control Regime. Seoul further warned that Japan’s export restrictions are not only detrimental to bilateral relations but could have an impact on global value chains and international free trade order.

Despite a meeting of the two countries’ foreign ministers on the sidelines of Asean-related meetings in Bangkok and an attempted intervention by Washington last week, Japan pushed ahead with Korea’s white list removal.

Japanese broadcaster NHK reported Wednesday that the foreign ministers of Korea, China and Japan are expected to told trilateral talks in Beijing on Aug. 21. They could possibly arrange a regular trilateral summit for the leaders of the three countries for some time later this year. It also reported that there is review of separate bilateral talks between Seoul and Tokyo’s top diplomats.

But a Korean Foreign Ministry official simply said that “nothing has been decided” so far on such trilateral or bilateral talks.

Abe previously signaled he doesn’t plan to have bilateral talks with Korean President Moon Jae-in in the near future, including during the UN General Assembly session next month.

Meanwhile, the global community is paying close attention to what Abe’s next move will be. Washington-based Foreign Policy magazine on Tuesday published an article on its website titled, “Japan Started a War It Wasn’t Ready to Fight.”

The article points out that the “landscape is now quite complicated” despite Abe’s party’s upper house victory last month. It notes Japan was left out of talks with North Korea and is facing pressure from the United States and challenges from the China-Russia alliance.

“Strong-arm politics can be awfully tricky,” the article states, adding that Abe “may soon have a better appreciation” for an old saying that “politics is bad for business.”