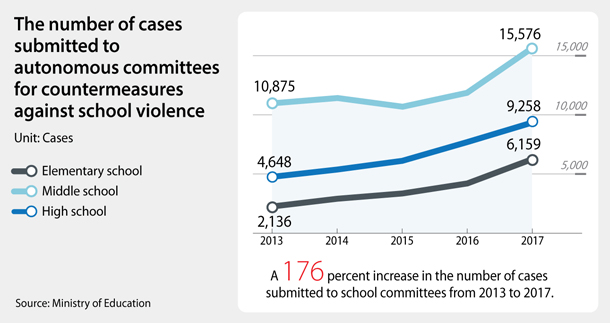 Twin brothers who went to the same high school in Seoul were playing around during recess. Like so many times before, the brothers, got into a fist fight with each other.

They were sent to the school’s faculty room and soon made up with each other.

However, the school was not able to brush past this incident because violence was involved. A teacher in charge of violent incidents at the school notified the boys’ parents and opened a case to be sent to the school’s autonomous committee for countermeasures against school violence.

Every school is required to have such a committee, which is made up of five to 10 people led by the schools’ vice principals. Students’ parents must fill at least half of the committee seats, and officials from third parties such as lawyers, judges, doctors or police officers can fill the remaining seats.

When the twin’s parents heard that their sons’ quarrel was to be submitted to the committee, they were shocked as they were the parents of both the perceived perpetrator and the victim. The committee was to punish one of the two brothers for committing violence, which was an outcome that neither the brothers nor the parents wanted.

Unfortunately, the matter is out of the family’s or the school’s hands. In accordance with the Act on the Prevention of and Countermeasures Against Violence in Schools, schools are required to send cases of “school violence,” which includes actions committed against students inside or outside school premises resulting in a physical or mental injury or damage to property, to the respective autonomous committee.

In the end, a trial was held, and the twins’ parents had to testify for their children separately as the guardians of both the supposed perpetrator and victim.

However, some people are criticizing schools for relying too much on committees, which they believe shift blame from schools.

“A scribble that mocked a student was discovered in a school bathroom,” said a school worker who administrates school violence cases. “The student’s parent demanded that the case be referred to the National Forensic Service and the student who scribbled on the wall be found and sent to an autonomous committee.”

When the school reported the incident to their supervising local education office, it said to go to the police and request an investigation.

Cases of student conflicts submitted to the committee are not always clear in deciding who the perpetrator and victim are. Often, perpetrators called to the committee resort to a blame game, revealing past incidents of where they were the victim, which leads to a cycle of blaming and claiming that the other party is in the wrong.

“There are times when students who hang out together mock or quarrel with each other, so sometimes everyone is the victim and the perpetrator,” said Ko Kwang-sam, a student rights administrator at Kyung Shin Middle School in Jongno District, central Seoul. “When a student is reported as a perpetrator, in many cases, the student demands another trial be opened as to not be the only one going down for their actions.”

In order to find a better solution to solving conflicts between students and improve how these committees are managed, a revision to the Act on the Prevention of and Countermeasures Against Violence in Schools was submitted to the National Assembly that would create a committee that would be managed by local education offices and oversee all student conflicts in schools within its jurisdiction, making it unnecessary for schools to have their own committees.

This is great news for teachers who were responsible for counseling and questioning students about incidents and would have to prepare stacks of paperwork every time students fought with each other. For each trial held by the committee, teachers would have to prepare around 20 pages of documents describing the incident and the students involved. They would also have to schedule appointments with those students, which cannot take place during class. Some teachers said that the students’ parents pressured them because the parents didn’t trust the system.

“There have been times when [parents] have sent me text messages late at night or intimidated me by saying that they will tip off the media,” said Cho Gwang-hee, a teacher at Banghak Middle School in Dobong District, northern Seoul.

Furthermore, many students and parents find the committees’ rulings unjust and often apply for retrials. In 2013, 391 cases were filed for a retrial to a committee as the complainants found their perpetrators’ punishment “too light.” This number went up to 1,186 in 2017. On the other hand, the number of cases where defendants wanted a retrial to get a lighter punishment increased from 373 to 682 during the same period. Only when students are expelled or transferred to another school as punishment are they allowed to request a retrial to the school committee. When students are unsatisfied by the retrial’s results, the only thing left for them is to go to court.

Dissatisfied by committees’ role in settling school scuffles, many students and their legal guardians have taken their cases to court.

The JoongAng Ilbo special reporting team reviewed 138 cases by these autonomous committees for countermeasures against school violence that were taken to court from May 22 last year to May 19 this year. Of these cases, 116 cases were lawsuits that sought to withdraw their disciplinary action or check whether their punishment could be nullified.

“When a punishment by an autonomous committee for countermeasures against school violence is decided, it is recorded in the students’ school records without exception,” said a worker at a local education office. “This is deadly for a high school student who is preparing for college.”