Korean golfer An Byeong-hun is hoping he’ll get hot just in time on the PGA Tour to make his first Presidents Cup team. 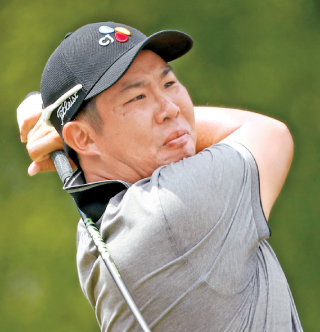 An Byeong-hun watches his shot during the final round of the Wyndham Championship on Sunday. [GETTY IMAGES/YONHAP]

That would be the third time lucky for the 27-year-old, who came up short in his first two cracks at representing the International Team at the biennial match play competition.

The Presidents Cup, held during odd-numbered years, pits the International Team of non-European golfers against the Americans.

For the International Team, the top eight players in the points race will automatically qualify, while the captain - South African legend Ernie Els this year - selects four additional players. The standings are determined by world ranking points accumulated from Aug. 27, 2018, to Aug. 25 this year.

After finishing third at last week’s Wyndham Championship, An jumped from 22nd to 16th in the Presidents Cup standings. And between An and the eighth-place golfer, C.T. Pan of Taiwan, are three Koreans: Im Sung-jae (12th), Kang Sung-hoon (14th) and Kim Si-woo (15th).

An will have to make another push as the PGA Tour’s FedEx Cup playoffs begin this week at the Northern Trust in New Jersey, or he could be left on the outside looking in again.

When asked if he’d been thinking about the Presidents Cup race, An said, “Oh, definitely 100 percent in my head.”

“Even last week, it was my No. 1 priority. I’ve still got two more weeks to push and try to get into the top eight,” An said through the PGA Tour. “And if I don’t get in, then I think I have three to four more months until the (four) picks are made. If I somehow miss out on the top eight, I’ll definitely try to play most of the fall events and get the last push. I’ve been playing well and need to get this momentum going.”

Of the four Koreans in the hunt, only Kim has played at a Presidents Cup before. He made the 2017 team at Liberty National Golf Club in New Jersey, where the U.S. side hammered the International Team 19-11.

An said missing out on the past two Presidents Cups has been a big motivating factor. He was 12th in the standings for 2015, when the Presidents Cup came to Korea for the first time, and ranked 15th two years later. On both occasions, captain Nick Price didn’t make An one of his extra picks.

“When you miss out by a little bit, it hurts. It’s very disappointing and I always want to play team golf,” said An, the 2015 European Tour Rookie of the Year still searching for his first PGA Tour title. “You want to play for your country and play for the team. I think that’s the beauty of team golf; you play more than for yourself.”

This year’s competition will take place from Dec. 12-15 at the Royal Melbourne Golf Club in Melbourne.