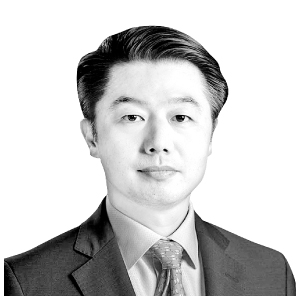 Chang Boo-seung
The author is a professor of international relations at Kansai Gaidai University in Japan.

Korea-Japan relations are in big trouble. Seoul’s Jung district hung flags in downtown Seoul encouraging a boycott of Japanese goods and ended up removing them in a day. While a boycott of Japanese products is picking up steam around the country, Korean tourists visiting Japan are harshly criticized for not understanding the gravity of the situation.

The media did not expect this. In March, a newspaper predicted that the possibility of Japan immediately enforcing retaliatory measures was slim because an export ban and similar measures would likely violate WTO regulations and harm Japan’s economy too. As a Korean professor living in Japan and teaching Japanese students, I was asked how aggravated Korea-Japan relations would harm Korea.

But when Japan announced its export ban on July 1, the atmosphere quickly changed. There were many analyses that Japanese Prime Minister Shinzo Abe was using the issue to help with the election of the Upper House on July 21. The election is over, but the situation is actually worsening. Japan excluded Korea from a so-called white list of countries receiving preferential treatment in trade. Now, we are watching to see what Japan’s second round of measures might be.

Korea is a democratic country. If people want to, they can change the kind of relations we have with Japan, even severing ties. But before making such a decision, we should think about the structural meaning behind the Korea-Japan discord and alternatives rather than following a superficial flow of events.

Normalization of relations with Japan was not just about money. If it had been, the United States would not have rushed the normalization at the time. For the U.S., Korea was the frontline of the Cold War and needed to become strong. The United States decided to include Korea in the international security and trade system. Washington’s basic plan was to put capital and technology into Korea to develop the economy, which would create a middle class and develop democracy.

The United States also chose Japan as Korea’s partner. Japan was the most suitable country to invest in Korea. Japan knew Korea well and built economic capacity through the post-war revival. The United States persuaded Japan. It was Japan’s gain to make Korea stronger as an anti-communist bastion. The United States urged Japan to normalize relations with Korea and stimulate its growth. For security, the United States also tied Korea to itself and Japan. Cooperation between the ROK Forces and Japan’s Self-Defense Forces was important.
After the Cold War, the United States made a new slogan of value alliance so that democratic countries would put a check on China together. Former Japanese Prime Minister Keizo Obuchi — who made the monumental Kim Dae-jung-Obuchi Declaration in 1998 — was a conservative yet welcomed liberal President Kim. Japan’s right wing saw the possibility of a value alliance against China from Kim, who was a democratic fighter. Seeing through Japan’s intention, Kim used it to receive the first post-war official apology from Japan.

With China’s rise, the United States chose an Indo-Pacific strategy and is building an extensive network to check China with Japan, India and Australia. The U.S. demands Korea choose between the United States and China. Japan’s export ban is not an expression of discontent about the forced labor issue. Japan plans to treat Korea as a country somewhere between the Indo-Pacific alliance and China after withdrawing the special status it has been offering Korea.

Japan is revealing its intention to reconstruct Korea-Japan relations from the root. It wants to drive Korea from the Korea-U.S.-Japan framework. Then, Korea needs to seek alternatives to the 1965 system as well as Korea-Japan relations. That is the substance of the challenge Korea is faced with.

In the 1965 system, Korea was included in the international trade system as a subordinate partner of Japan. Korea has only suffered deficits in trade with Japan as a result of such a choice. The same goes for security. Korea’s security has not just depended on the Korea-U.S. alliance but on the Korea-U.S.-Japan alliance since the Cold War.

If Japan wants to exclude Korea from the trilateral alliance, Korea needs to ask the United States to clarify its position. If the United States chooses Japan, is Korea ready to say it has the power to defend its own security without the United States? Without such a determination, it’ll be hard to win this fight.

The United States is likely to pull out from East Asia gradually and try to delegate its role to Japan. In this case, Korea has three options: choosing Japan, China or going independent. This crisis will come sooner or later. A structural crack has just appeared in Korea-Japan relations, which is the weakest link in East Asia. Korea needs to feel the gravity of the choice seriously and make a decision. The future depends on our choice.