Galaxy Note10 is made for multitaskers

Galaxy Note10 is made for multitaskers 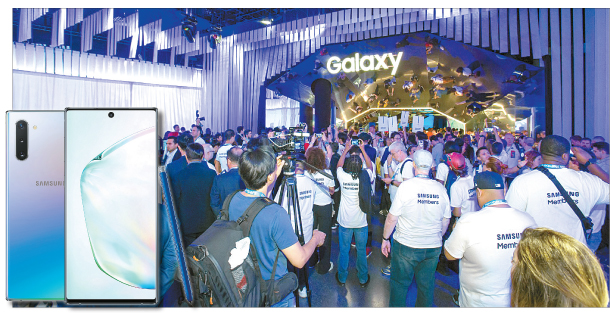 Samsung launched the Galaxy Note10, left, and the Note10+ at a Galaxy Unpacked event, which took place in Brooklyn, New York, on Wednesday. [SAMSUNG ELECTRONICS]

Promising to take users’ productivity and creativity to the next level, the latest version of the phablet has been redesigned and comes with an improved version of the S Pen stylus, streamlined mirroring functionality and increased battery life, according to the electronics giant.

For the first time in the Note series, Samsung introduced the Note10 in two different sizes. The regular Galaxy Note10 has a 6.3-inch screen while the Note10+ measures in at 6.8 inches - Samsung’s biggest yet.

The preceding Note9 had a 6.4-inch screen. Apart from the size, the Note 10+ also has additional specs like more RAM and a sophisticated Depth Vision camera that can scan an object and turn it into an animated GIF.

According to Samsung, the primary target of the Note10 is the growing number of people who pursue a so-called slash career, which refers to people who draw multiple incomes from multiple jobs.

While the Note9 S Pen had a remote control function, the new version allows users to control their device by drawing specific shapes with the pen without it needing to touch the screen. Users can, for instance, change the camera mode or zoom in by swinging the pen above the screen.

An augmented reality function makes it possible for users to draw on people captured by the camera, and the system is intelligent enough to attach the drawings to the subject and continue to track them even as other people enter the shot.

Users can also tell the phone to focus on the audio from a specific subject when recording a video, according to Samsung.

The so-called pro-grade camera with “pro lenses” can dominate landscapes, close-ups and portraits, making the gadget especially useful to content creators, according to Samsung.

“Inspired by a generation that flows seamlessly between work and life, the Galaxy Note10 gives users the freedom to work the way they want and showcase their creative spirit all on-the-go,” said Samsung in a press release on Wednesday.

The ability to optically zoom in on handwriting for an easier view and editing experience is another function added to the Note10. Handwritten notes can be exported to text in various formats like Microsoft Word and PDF.

The Note10 also comes with increased battery life and charges in half an hour, according to the company. Other functions include in-screen fingerprint sensors, wireless charging and a DeX app that will enable users to drag and drop files between devices - both Windows and Mac - and interact with mobile apps on their computers.

There are trade-offs for the advanced functions, however, most noticeably the lack of a headphone jack and the single front-facing camera, unlike the Galaxy S10 Plus and S10 5G, which both have dual front-facing cameras. Samsung also removed the micro SD card slot from the Note10, although the Note10+ still has this memory expansion option.

All Note10 phones are available in Samsung’s aura glow, aura white and aura black colors, with other options available for different models. Only 5G models will be available in Korea.

Sales will begin on Aug. 23, but the three mobile operators in Korea - SK Telecom, KT and LG U+ - started accepting pre-orders today.

Hoping to lure in more 5G subscribers, mobile operators have rolled out a slew of promotions for the upgraded Note. Apart from price promotion, telecommunications companies are also offering exclusive colors.

Apart from the colors, SK Telecom says it will offer promotions to select Samsung Card and Lotte Card holders. Up to 750,000 won can be taken off the price of the phone through the telecom company’s coupon system. Those who return existing phones from Samsung can also enjoy additional price benefit, according to SK Telecom.

To celebrate its exclusive red device, KT has joined hands with cosmetics brand Hera to enter all Note10 buyers into a lucky draw to win a Hera red lipstick. Those that order the phone through KT’s website will also get to choose a free gift from a range of items including a Chanel lipstick, Montblanc notebook and a set of perfumes.

KT has also introduced a discount on its subscription plan. The mobile company says it will offer a family 5G subscription plan that enables family members to each use 5G for as little as 40,000 won per person.

LG U+ will offer a six-month YouTube premium subscription and a virtual reality head-mounted device to those who sign up for a 5G subscription plan that costs more than 105,000 won by late September. Some other benefits for those who pre-order the Note10 include movie tickets and Starbucks coupons.