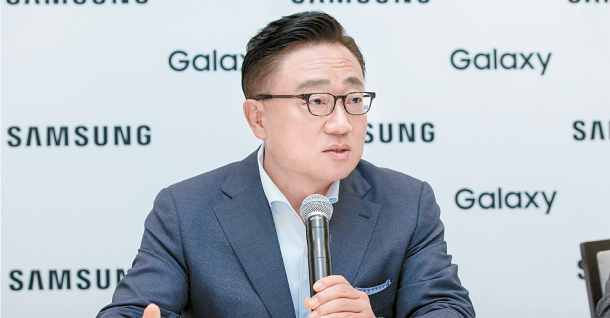 Japan’s restrictions on exports to Korea will not impact this year’s production of the Galaxy Fold and Note10, said Koh Dong-jin, president of Samsung Electronics’ smartphone business, on Wednesday.

But if the tensions continue, the mobile division may be facing a “crisis” next year, he added cautiously. The comments came during a press event with reporters after the company’s Unpacked event in New York.

“We have a three to four months stockpile of parts, so the production and release of the Galaxy Note10 and the Fold will not be affected,” said Koh, when asked about Japan’s recent decision to exclude Korea from its so-called white list of countries that receive preferential treatment for export procedures.

“If the situation goes on for more than three to four months, there will be an inevitable impact on smartphone parts considering [it will effect] the stockpiles of our suppliers.”

He added that the slow global economy, U.S.-China trade war and ongoing trade issues with Japan were pulling down visibility of the future of the mobile business to a point that decision making in the short term has now became a difficult task.

Koh also discussed the Galaxy Fold. After four months of delays since the original release date passed, Samsung announced that its first foldable phone would roll out in September.

“What we initially planned for the April release was to prepare one million units for sale, but after the rescheduling, that volume was readjusted to below one million,” Koh said. “It will be released in 20-or-so countries, including Korea.”

A precise date for the launch was not given. Rival Huawei is also expected to roll out its delayed foldable phone, the Mate X, next month.

“What’s important is to present a meaningful innovation in the market. I don’t mind whether or not we release it earlier than Huawei’s foldable phone,” he said. “All I want is to hear people say ‘Samsung did well.’”