Actions speak louder than words in dealings with Japan

Actions speak louder than words in dealings with Japan 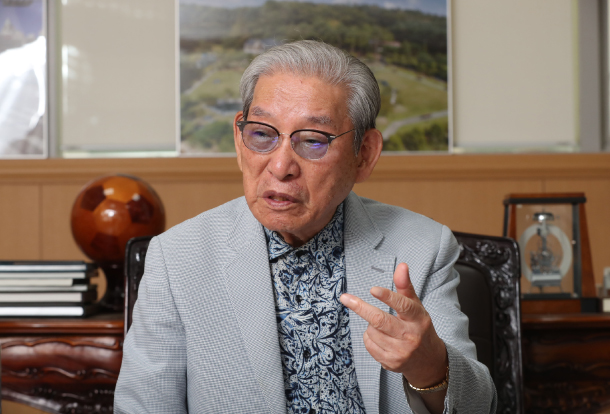 While there are many that speak of making Korea surpass Japan, not many put such patriotism into action. But Samyoung Chemical Honorary Chairman Lee Chong-hwan is the one whose actions speak louder than his words. Lee, 96, donated almost all of his assets, in a vow to make Korea a world-leading country that surpasses Japan, to establish the Kwanjeong Educational Foundation, which now operates the largest fund in Asia of around 1 trillion won ($8 billion).

The organization founded in 2000 has awarded a total of 230 billion won to about 10,000 students, most of who are studying science and industrial technology. Last month, the honorary chairman sent 250 million won as a year’s worth of research funds to the Seoul National University Institute of Japanese Studies after coming across a report from the JoongAng Ilbo that government funding for the institute came to a halt a year ago.

“We can only surpass Japan if we know it well,” Lee said, adding that he gave the financial support to the Japanese studies institute for the same reason. Lee is also a real witness of Korea’s modern history. Having lived almost a century, he was a victim of forced labor during the Japanese occupation of Korea from 1910 to 1945 and was at death’s door during the Pacific War.

During his time at Samyoung Chemical, Lee focused on making products and competing against Japanese companies.

Below are edited excerpts of the JoongAng Ilbo’s interview with Lee on July 30.

Q. You are 97 in Korean age this year, but you still look very well.

A. The doctor said I could live another 10 years. But even if I do live longer, I have to stay healthy, and what meaningful things I do in that time is important.

The Kwanjeong Educational Foundation provided 250 million won to the Seoul National University Institute of Japanese Studies. What is the meaning behind this support?

If you know your enemy and yourself, you can win every battle. If we are trying to surpass Japan, we should know about Japan. There are some people who think they know about Japan well and mock the country, citing historical and moral superiority. And that is why I think our study of Japan is lacking. If we are trying to beat Japan, we need to comprehensively research Japan’s past, present and future to be a step ahead. The Seoul National University Institute of Japanese Studies does that work, and when I heard government funding was cut for the institute, I thought I should instead support with funds.

What do you expect from the Institute of Japanese Studies?

Of course the institute should prepare ideas for problems in the near future, but I also want the institute to focus on research projects that help the country prepare medium- and long-term strategies to overcome the recent crisis.

From what I know, your support was for a year’s worth of research funds. Do you plan to continue the support?

Of course. I am considering continuing the support. But I will have to keep an eye on the institute’s progress over the next year.

I realize that you have waged battles against Japanese technologies on the industrial front. What is a way to surpass Japan?

Japanese people don’t stop at imitating others’ works, but they are skilled at moving a step further to make better products. If comparing person by person, Koreans are better than Japanese, but Japanese people are good at fixing themselves on a single project and using it for industrial purposes. That is their power as a group. Therefore, we need to fully grasp what Japanese people are doing so that we don’t stay behind them in industrial power.

Samyoung Chemical has also made industrial materials. Haven’t you competed against Japanese companies in that process?

Samyoung Chemical didn’t stop with making household goods like plastic bins out of petroleum. We kept on moving to create capacitor film, an ultra-thin film used to discharge pulsed power energy and distribute electricity, which is as a core material for electronic products. We learned that a Japanese company imported early technology from the United States to make one, so we quickly made moves to stay in the race. Now, Samyoung Chemical is one of the top three capacitor film makers next to Toray from Japan and Treofan of Germany. Although Japan started restricting exports to Korea, doing that to capacitor film is no use because we are already making it. There must be more materials and products like this.

From what I know, you were born during the Japanese occupation and experienced forced labor. Is your charity work related to this history?

In 1942, I went abroad to study commerce at Meiji University in Japan. Even back then as a young boy, I believed I had to study more than Japanese people to beat Japan. But later in 1944, nearing the end of the Pacific War, I was forcibly drafted and sent to Manchuria under the Kwantung Army to fight against the Soviets. I was dragging around cannons until coming back to the Korean Peninsula in August 1945 as the unit was moving to Okinawa. That is when liberation took place. If I eventually made to Okinawa, I probably would have died. I was lucky. Since then, I always thought a country should prosper to have its people not suffer. If a country seeks to prosper, smart young people should have no financial worries in their studies.

What thoughts come to your mind when you look at Korea’s current situation?

Some people say that the Korean Peninsula now feels like the end of the Korean Empire, but that is absolutely false. I lived for almost 100 years, and Korea’s power has become incomparably greater than back then. Nobody can easily walk all over us. I believe the reason neighboring countries are being hostile is that they are trying to exert power and not be ignored in solving the problems of the peninsula. Our country is geographically critical. If we don’t let others drag us around and respond well, this could instead become an opportunity for us.

How should the conflict between Korea and Japan be resolved?

Both countries need to return to practicality in pursuit of mutual benefits. The so-called “game of chicken” of merely asking the other to take a step back needs to stop. If Japan doesn’t change its stance, it will have to give up its dream to be a world-leading country later on. We need to be armed with the perspective that Japan will have to come forward and deeply apologize to us on the day we surpass Japan.
The Kwanjeong Educational Foundation has mostly given out scholarships to science and engineering students, and you said in the past you wish some of the scholarship recipients win the Nobel Prize. Nineteen years have passed since you founded the foundation, but that hope hasn’t become realized yet. Are you frustrated?

I wish there was a Nobel Prize winner, but I think I will have to wait for another 10 years at least. Starting 10 years ago, we began to see some of the scholarship recipients receiving doctorate degrees from prestigious overseas universities, and now the number counts to around 600. Nobel Prize winners are often awarded after years of research or even on their lifetime accomplishment, so that’s probably why we haven’t seen one yet. Japan has produced around 20 Nobel Prize winners in the scientific field, but so far Korea has seen none, which makes me feel regretful. We just have to keep on going.

I heard that you are fighting in court in regards to the donation. Can you tell us details?

A few years ago, I sold all of my stocks and passed that money to the foundation. I did that because in Korean law, it is complicated to make donations with raw stocks. The National Tax Service reported me as it believes there was a problem in paying transfer tax. As I’m currently on trial, I can’t really go into much detail. But I have never even touched that money in my life. Do you think I intentionally evaded tax for my own financial gains? I am going through the trial in a belief that the current laws and policies regarding donations can be properly fixed in the future, and I think it will go well.