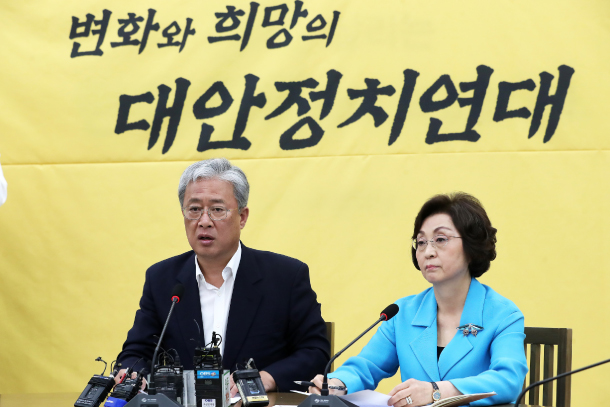 Rep. You Sung-yop, left, floor leader of the Party for Democracy and Peace (PDP), holds a press conference at the National Assembly on Thursday and announces that nine of the party’s 14 lawmakers, including him, will leave on Monday. [NEWS1]

The Party for Democracy and Peace (PDP), the fourth largest political power in the National Assembly, will split. A group of lawmakers said Thursday they will create a new party of their own.

Rep. You Sung-yop, floor leader of the PDP, held a press conference on Thursday and announced that nine of its 14 lawmakers, including him, will leave the party on Monday. “This is an unavoidable choice for hope and change,” You said.

In addition to You, other key members of the party including Rep. Chun Jung-bae, Rep. Park Jie-won and Rep. Chang Byoung-wan will join the plan to create a new party.

The PDP was created in February last year by a group of lawmakers who left the People’s Party created by Ahn Cheol-soo. All 14 lawmakers of the PDP represent districts in Gwangju and North and South Jeolla provinces, a region often referred to as “Honam” in Korean politics.

Two proportional representatives of the Bareunmirae Party - Chang Jung-sook and Park Joo-hyun - have expressed their support for the PDP. The two lawmakers could not join the PDP when it was established last year, because they would have lost their seats. Chang, in particular, is supporting You’s plan to create a new party.

The PDP has been experiencing an internal power struggle, as the group of lawmakers demanded its Chairman Chung Dong-young step down. They want to establish an emergency leadership and refresh the party ahead of the April general election.

Chung has resisted their demand for his resignation and claimed Rep. Park, a fourth-term lawmaker and a political veteran, was behind the campaign to push him out in order to control the nomination process for next year’s election.

According to You, he had a final negotiation with Chung on Wednesday, but failed to reach an agreement. On Thursday, the group of nine lawmakers had a meeting and decided to leave the PDP.

Because the lawmakers said they will submit their defection letters on Monday, it is possible that more negotiations will take place in the coming days.

“We proposed to Chung that he step down and introduce an emergency leadership, but he rejected,” You said. “We still hope to meet him later in the same journey. Although we declared that we will leave the party, ultimately, we don’t want to.”

The lawmakers said they will recruit a chairman from outside, while You will assume the acting leadership for the time being. “We are working hard to surprise the people by recruiting someone impressive,” You said.

According to You, the group is expected to have 13 lawmakers, including Rep. Kim Kyung-jin of the PDP, although he had not attended the meeting on Wednesday, and two independent lawmakers.

The PDP will be left with five lawmakers including Chairman Chung.

If the lawmakers leave the PDP en masse on Monday, it will be the starting point of a massive political realignment ahead of the general election. They are expected to recruit more members from the Bareunmirae Party, the third largest power in the National Assembly, which has 24 lawmakers.

The Bareunmirae Party, established in February last year by a merger of Ahn’s People’s Party and Rep. Yoo Seong-min’s Bareun Party, is also facing an internal power struggle and a possible split, as the main opposition Liberty Korea Party (LKP) is trying to recruit Yoo.

Yoo is an icon of resistance against former President Park Geun-hye and her faction inside the LKP. He and his followers left the LKP, then Saenuri Party, in 2017 to launch the Bareun Party. Although it started with 29 anti-Park lawmakers, many of the Bareun representatives later returned to the LKP the following year.

Yoo, however, stayed and later merged with Ahn to form the Bareunmirae Party. While Ahn retired from politics, Yoo is currently confronting the Bareunmirae Chairman Sohn Hak-kyu on how to operate the party ahead of the next year’s election.

Rep. Na Kyung-won, floor leader of the LKP, openly proposed that Yoo return to the LKP, fueling the Bareunmirae’s conflict. “The LKP has no future unless we merge with Rep. Yoo,” Na told the JoongAng Ilbo on Monday during an interview, published on Wednesday. “It will be great if Yoo runs in a district in Seoul [as an LKP candidate].”

She also said she will play a role to recruit Yoo and his followers.

The idea was welcomed by some in the LKP, particularly those who had left to form the Bareun Party but returned later. They said recruiting Yoo will refresh the party’s image as more reform-driven and appeal to the centrist voters.

They also believe the LKP would generate more support in the capital region, where it was largely defeated by the ruling Democratic Party.

The pro-Park faction in the LKP was upset about the idea. “There is no need to make such proposal to Yoo, who has never expressed his intention to join us, and inflate his value,” said Rep. Kim Jin-tae. “It is only Na’s personal opinion.”

Na’s proposal also fueled the factional split of the Bareunmirae Party. Its chairman, Sohn, said Na’s interview revealed the true intentions of both the LKP and Yoo.

Yoo, however, issued a press release on Wednesday and denied that he had a secret consensus with Na to discuss a plan to rejoin the LKP.