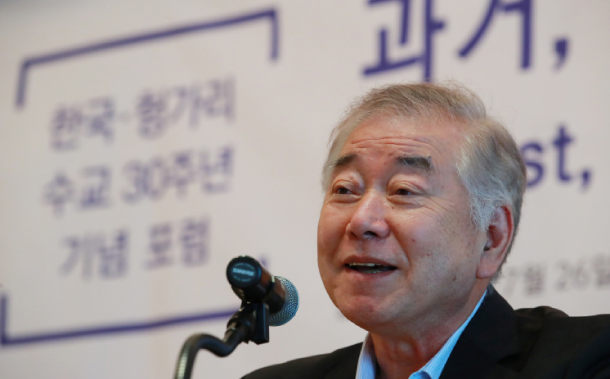 “How can you possibly send a destroyer of the Korea-U.S. alliance to be ambassador to the United States?” Chairman Hwang Kyo-ahn of the Liberty Korea Party (LKP) said Thursday during a meeting of the party leadership.

Hwang was reacting to media reports saying that the president’s special adviser for foreign affairs and national security would be named to replace current U.S. Ambassador Cho Yoon-je.

“This is the worst example of the president’s arrogance and high-handedness,” Hwang said. “[Moon Chung-in] even argued that the Korea-U.S. alliance must end. What will he do if he is appointed ambassador? We can never agree to such an appointment. The people won’t accept it either.”

Hwang called into question the president’s abilities in the diplomatic realm. “The Korea-U.S. alliance and cooperation among Korea, Japan and the United States are collapsing, while North Korea, China and Russia are uniting firmly to threaten our national security,” he said.

“There has never been a precedent of Korea failing in its diplomacy with all four major powers at the same time. And yet, this administration is isolating Korea further.”

A professor emeritus at Yonsei University, Moon Chung-in is also the editor-in-chief of Global Asia, a Seoul-based quarterly magazine in English.

Throughout this week, South Korean media has been speculating that Moon Chung-in was being considered for the ambassador position in Washington, prompting howls of protests from conservatives.

The scholar has candidly expressed misgivings about the South Korea-U.S. alliance. In May 2018, Moon Chung-in told The Atlantic that he would eventually like to see the alliance end.

According to the interview, Moon Chung-in said that alliances are in general a “very unnatural state of international relations” and said that, “for me, the best thing is to really get rid of [the] alliance.”

Moon Chung-in said it might be inevitable for South Korea to rely on the alliance with the United States in the short to medium term, but in the long term, he wants to see a “transformation from an alliance system into some form of a multilateral security cooperation regime.” He also told The Atlantic that the multilateral security regime will allow South Korea to not take side either with China or the United States.

In September 2017, Moon Chung-in said in a public debate that a war must not be allowed on the Korean Peninsula, even if that meant an end to the South Korea-U.S. alliance. The remarks were made after U.S. President Donald Trump mentioned a possible military option against North Korea.

In April 2018, he also stirred another controversy. “What will happen to U.S. forces in South Korea if a peace treaty is signed? It will be difficult to justify their continuing presence in South Korea after its adoption,” Moon Chung-in wrote in an article in Foreign Affairs.

“It will be interpreted as a determination that Korea will end trilateral cooperation with Japan and the United States and join North Korea, China and Russia,” she said. “The country is being sacrificed by the Moon administration’s appointments.”

“Recommendations are all completed, and we just need the president’s final approval,” a presidential aide told the JoongAng Ilbo Thursday. “There is a small possibility that it will be deferred to next week.”

Moon Jae-in is expected to replace about six minister-level officials in his administration, including the ministers of justice, agriculture, and gender equality. Cho, who left the Blue House last month, is reportedly confirmed as the new justice minister.

Moon Jae-in will also replace the heads of the Fair Trade Commission, Financial Services Commission and Korea Communications Commission in the upcoming reshuffle.

As opposition lawmakers balked at the president’s possible choice of Moon Chung-in, a Blue House source told the JoongAng Ilbo that an announcement was not imminent.