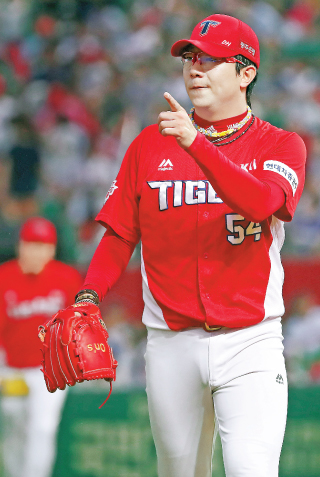 “It’ll get better,” said Yang Hyeon-jong of the Kia Tigers back in May as fans criticized the Gwangju club for overusing the much-loved pitcher, throwing him off his game.

When the 2019 season started, Yang got off to a terrible start by picking up five straight losses. In six games throughout March and April, he had an 8.01 ERA, and the fastest speed of his pitch was in the mid-140 kilometers per hour (87 miles per hour) range.

Making matters worse, the Tigers were also struggling at the time, dropping to the bottom of the league.

Due to this, some fans started to criticize the coaching staff and former manager Kim Ki-tai for overworking Yang. From the 2014 season to last year, Yang tossed the most innings in the KBO, at 933 and two thirds of an inning.

Yang denied the criticism, saying, “I know my body the best. It’s not overworked. My pitches are slowly getting stronger.”

Three months after his comment, he proved his point. This is not only good news for the Tigers, but also a plus for the Korean national baseball team as the Tokyo Olympics is less than a year away and Yang, who in 2017 became the first player in KBO history to win every single major award in one season, is supposed to be one of the best pitchers in the country.

Once the weather started to warm up, Yang quickly picked up his pace. As he rediscovered his fastball speed, his sliders also got stronger. By finally getting his speed up to where it should be, Yang started to warm up, picking up 10 wins by the end of the first half of the season.

As of Thursday’s game, Yang picked up 12 wins and eight losses with a 2.73 ERA. He is ranked fourth in wins and seventh in ERA in the KBO.

Then, during a game against the NC Dinos at home in Gwangju on Aug. 4, Yang tossed his first complete game of the season.

Yang may no longer hold the top spot in the pitcher rankings in Korea, but he’s not that far behind.

This season, Josh Lindblom of the Doosan Bears is by far the best pitcher in the KBO. Lindblom currently leads the league in wins, ERA, strikeouts and winning percentage.

However, looking at the two pitchers’ statistics since May, Yang has quickly started to catch up. Since May, both pitchers have picked up 12 wins and Yang has a lower ERA than Lindblom, at 1.25.

Yang’s sloppy start to the season was likely due to a difficult winter. Yang is known for working incredibly hard during the offseason, but last winter, due to his youngest son’s health, he had to slow things down. As he didn’t want his personal issues to affect the team, Yang only told former manager Kim and was given permission to join the clubs’ spring training later than the other players. During this time, Yang trained by himself.

Yang ended up joining the Tigers’ spring training in Okinawa a week later than the others, but once he joined, he worked harder than anyone else. Despite his hard work, it took Yang until April to finally get the speed of his pitches to where it should be.

Making it worse, in May, Tigers manager Kim resigned. At the time, Yang apologized to Kim as his fall from grace came as Yang was still struggling to make an impact.

Now that Yang is back on form, the club can once again look for a chance to advance to the postseason.

As of Thursday’s game, the Tigers are ranked seventh at 45 wins, 58 losses and a draw.

However, the chances of the Tigers making the cut are pretty slim as they are a good six games behind the fifth place team, the Dinos.

Yang’s return is also good news for the Korean national baseball team. Led by manager Kim Kyung-moon, Korea will compete at the Premier12 in November, which is a qualifying event for the 2020 Tokyo Olympics.

Korea is assigned in Group C with Cuba, Australia and Canada. Group C’s games will be played in Korea at the Gocheok Sky Dome in western Seoul. The top two teams from each group will advance to the Super Round.

For the Premier12, major league clubs tend not to allow their players to join the national team, meaning it’s unlikely that Ryu Hyun-jin of the Los Angeles Dodgers will play. Due to this, Kim Kwang-hyun of the SK Wyverns and Yang are likely to be the top two starters.

Having received left elbow surgery in 2017, Kim Kwang-hyun made a successful return from injury by picking up 13 wins and three losses with a 2.58 ERA so far this season.

With Yang back on form as well, Korea now has two strong starting pitchers.

“Yang Hyeon-jong and Kim Kwang-hyun have a lot of experience at international tournaments,” Kim Kyung-moon said. “Since they are playing well this season, I can rely on them.”